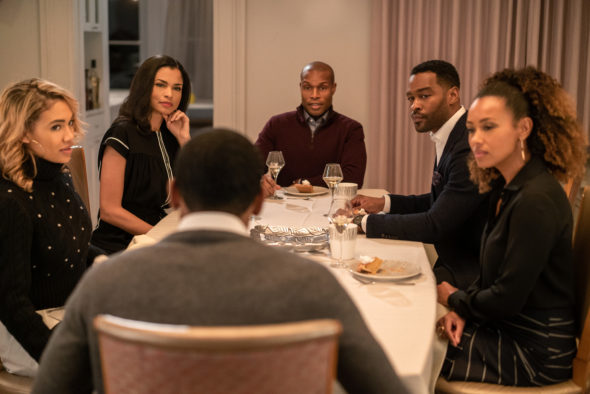 Can Tariq live in two worlds without being torn apart? Has the Power Book II: Ghost TV show been cancelled or renewed for a second season on Starz? The television vulture is watching all the latest cancellation and renewal news, so this page is the place to track the status of Power Book II: Ghost, season two. Bookmark it, or subscribe for the latest updates. Remember, the television vulture is watching your shows. Are you?

Airing on the Starz cable channel, Power Book II: Ghost is a spin-off of the Power TV series and picks up days after the finale. Ghost stars Michael Rainey Jr., Naturi Naughton, Mary J. Blige, Clifford “Method Man” Smith, Daniel Bellomy, Gianni Paolo, Justin McManus, LaToya Tonodeo, Lovell Adams-Gray, Melanie Liburd, Paige Hurd, Quincy Tyler Bernstine, Shane Johnson, Woody McClain, and Sherri Saum. In the story, Tariq St. Patrick (Rainey Jr.) is a freshman at Stansfield University with a bright future ahead of him. He would be the embodiment of his father’s dreams, if not for the double life he’s living. With his mother, Tasha (Naughton), in jail for the murder of his father, Tariq is forced to split his time between school and hustling to pay for Davis MacLean (Smith), the fame-hungry defense lawyer. With no better options, Tariq turns to the familiar drug game, entangling himself with a cutthroat family headed by Monet Stewart Tejada (Blige).

Will Starz cancel or renew Power Book II: Ghost for season two? The cable channel had great success with the original Power series and has ordered several related shows. I think a second season renewal is a safe bet. I’ll update this page with breaking developments. Subscribe for free alerts on Power Book II: Ghost cancellation or renewal news.

9/23/20 update: Power Book II: Ghost has been renewed for a second season on Starz.

What do you think? Are you glad the Power Book II: Ghost TV show has been renewed for a second season? How would you feel if Starz had cancelled this TV series, instead?