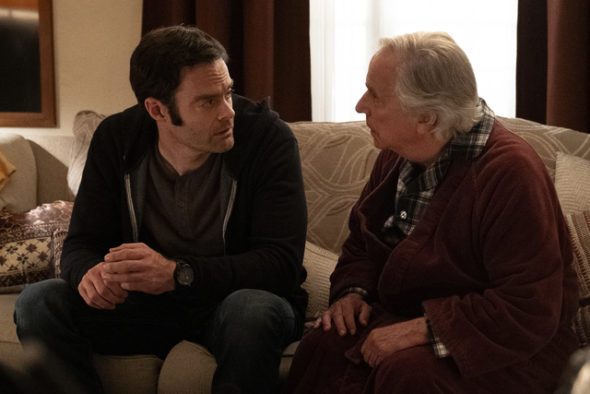 Airing on the HBO cable channel, the Barry TV show stars Bill Hader, Stephen Root, Sarah Goldberg, Anthony Carrigan, Henry Winkler, and Sarah Burns with D’Arcy Carden and Michael Irby in recurring roles. The story begins as former Marine Barry Berkman (Hader), a hitman from Cleveland, travels to Los Angeles to kill someone. He finds himself joining an acting class taught by self-obsessed Gene Cousineau (Winkler). There, Barry meets aspiring actress Sally Reed (Goldberg) and falls in love with the craft and wants to change careers. Meanwhile, he continues dealing with criminal associates like Monroe Fuches (Root) and NoHo Hank (Carrigan). Getting out of the business is messy. What is it about Barry’s psyche that led him to become a killer in the first place? Season three finds him and the others trying to make the right choices.

The third season of Barry averages a 0.06 rating in the 18-49 demographic and 278,000 viewers in the live+same day ratings (includes all DVR playback through 3:00 AM). Compared to season two, that’s down by 92% in the demo and down by 83% in viewership. While these numbers don’t include further delayed or streaming viewing, they are a very good indicator of how a show is performing, especially when compared to others on the same channel. There can be other economic factors involved in a show’s fate, but the higher-rated series are usually renewed and the lower-rated ones are cancelled. Find out how Barry stacks up against other HBO TV shows.

Will HBO cancel or renew Barry for season four? The second season aired in 2019 and was one of the cable channel’s highest-rated shows (in part thanks to it having the final season of Game of Thrones as a lead-in). While the traditional ratings are way down (more people have moved to delayed viewing), Barry is still one of HBO’s most notable comedy shows. As long as Heder wants to continue, I think the show will be renewed.  I’ll update this page with breaking developments. Subscribe for free alerts on Barry cancellation or renewal news.

What do you think? Are you glad that the Barry TV show has been renewed for a fourth season? How would you feel if HBO cancelled this TV series, instead?

Please reconsider in boost your number ratings so funny enjoy it and love it never missed any episode of it. Bill Hater comedian and Henry Wrinkler awesomeness cast too. Look forward forward to seeing it every Sunday,