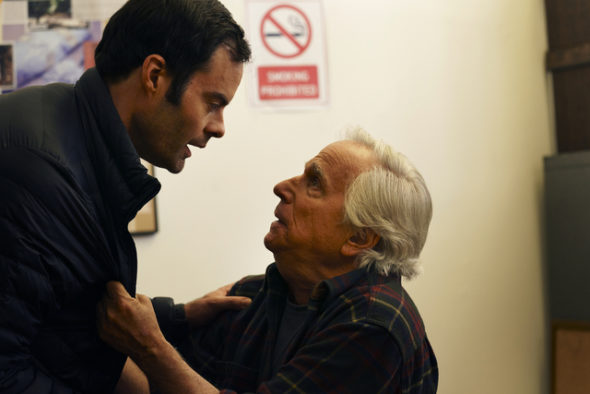 Keep your eyes out for a certain hitman in Hollywood. HBO has renewed the Barry TV series for a fourth season. The eight episodes of season three will finish airing on June 12th.

A dark comedy crime series, the Barry TV show stars Bill Hader, Stephen Root, Sarah Goldberg, Anthony Carrigan, Henry Winkler, and Sarah Burns with D’Arcy Carden and Michael Irby in recurring roles. The story begins as former Marine Barry Berkman (Hader), a hitman from Cleveland, travels to Los Angeles to kill someone. He finds himself joining an acting class taught by self-obsessed Gene Cousineau (Winkler). There, Barry meets aspiring actress Sally Reed (Goldberg) and falls in love with the craft and wants to change careers. Meanwhile, he continues dealing with criminal associates like Monroe Fuches (Root) and NoHo Hank (Carrigan). Getting out of the business is messy. What is it about Barry’s psyche that led him to become a killer in the first place? Season three finds him and the others trying to make the right choices.

The third season of Barry averages a 0.06 rating in the 18-49 demographic and 278,000 viewers in the live+same day ratings (includes all DVR playback through 3:00 AM). Compared to season two, that’s down by 92% in the demo and down by 83% in viewership.  It’s worth noting that the second season’s numbers were much higher than usual because the show was paired with the final season of Game of Thrones.

· HBO announced today that the critically acclaimed dark comedy series BARRY has been renewed for a fourth season. Season four will begin production in Los Angeles in June, with Bill Hader directing all eight episodes. Hader and Alec Berg are the series co-creators and executive producers.

· Season 3 logline: Desperate to leave his violent past behind in favor of his newfound passion, Barry (Bill Hader) is attempting to untangle himself from the world of contract killing and fully immerse himself in acting. But getting out is messy. While Barry has eliminated many of the external factors that pushed him towards violence, he soon discovers they weren’t the only forces at play. What is it about his own psyche that led him to become a killer in the first place? Season three finds Barry and the other characters trying to make the right choice.

· Variety hails season three of BARRY as “a masterpiece… funnier and sharper than ever,” with “a remarkable performance by Hader” for “TV’s most fascinating protaganist.” Los Angeles Times declares it as “a masterclass”…”one of TV’s best suspense-filled thrillers,” and The Daily Beast “the best show on TV.” IndieWire praises the season for being “astonishing and beautiful,” and Vulture for being “directed with precision and authority… and crafted with rigor and care.” “Every performance [is] a treasure” with these “wonderful, tortured characters,” says The Hollywood Reporter.

· Amy Gravitt, executive vice president, HBO Programming quote: “Bill, Alec and the entire cast and crew delivered an exquisite third season of BARRY, it’s a masterful blend of laughs and suspense,” says Gravitt. “I’m so happy to announce that we are picking up the fourth season.”

What do you think? Have you kept up with the Barry TV series on HBO? Are you glad that this dark comedy has been renewed for a second season?

I’ve seen every episode of “Barry” to date. I love the show, but I hope season 4 is funnier like seasons 1 and 2.