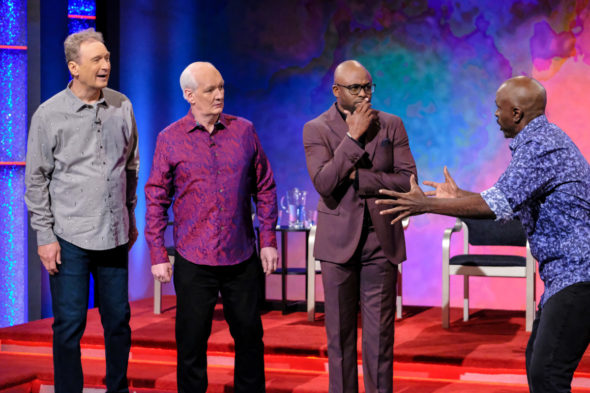 Colin, Wayne, and Ryan will have to stay on their toes. The CW has renewed the Whose Line Is It Anyway? TV show for an 11th season. This will be the show’s 19th season overall, including the eight seasons on ABC and ABC Family.

A long-running comedy improv series, the Whose Line Is It Anyway? TV show is hosted by Aisha Tyler and each episode typically features Ryan Stiles, Wayne Brady, Colin Mochrie, and a guest performer. The foursome tests their comedic reflexes by participating in a series of spontaneous improv games. After each round, Tyler doles out points to the performers and she then declares a winner at the end of every episode (not that the points matter). Guests in season 18 (the 10th on The CW) include Heather Ann Campbell, Jeff Davis, Keegan-Michael Key, Nyima Funk, Greg Proops, Heather Anne Campbell, Kevin McHale, and Laila Ali.

Just 10 new episodes have aired so far this season and it appears that The CW may be holding back some installments in preparation for 2022-23. The network has announced that two original episodes of Whose Line will be airing each Friday night this fall. The series will be paired with Penn & Teller: Fool Us.

What do you think? Do you enjoy the Whose Line Is It Anyway? TV show on The CW? Will you be watching the 19th season on Friday nights?

Thank you sooooo much for renewing Whose Line is it Anyway? Best news! I’m obsessed with all the reruns and watching YouTube clips so I can’t wait for new episodes!!

Me too we need fun comedy that you can watch with the whole family! I hope they do more than 10 new epusodes