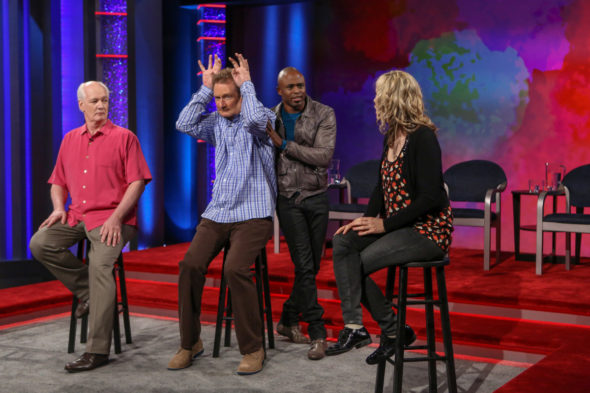 A CW comedy improv series, the Whose Line Is It Anyway? TV show is hosted by Aisha Tyler, and each episode typically features Ryan Stiles, Wayne Brady, Colin Mochrie, and a guest performer. The foursome tests their comedic reflexes by participating in a series of spontaneous improv games. After each round, Aisha will dole out points to the performers and declare a winner at the end of every episode (not that the points matter). In season 18 (the 10th on The CW), guests include Heather Ann Campbell, Jeff Davis, Keegan-Michael Key, Nyima Funk, Greg Proops, Heather Anne Campbell, Kevin McHale, and Laila Ali.

Congratulations to the entire team complete with laughs. Not to mention the production lighting and if I’ve missed something or whatever it takes to make a great show.

I love this show. I was thrilled it was renewed and hope it continues. It is a show that always makes laugh. Props, questions, sound effects and when they make up the dialogue for movies are my faves.