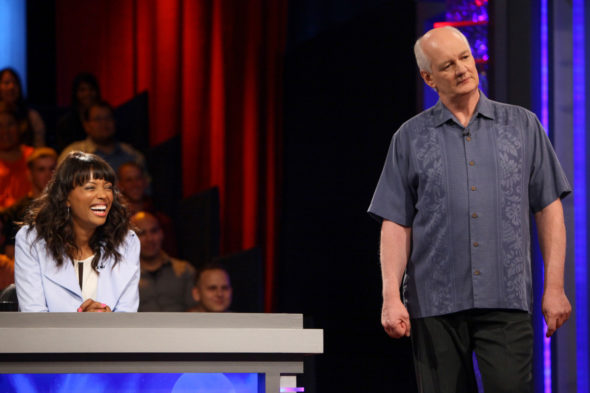 Which of these improv pros is the funniest? Has the Whose Line Is It Anyway? TV show been cancelled or renewed for a 19th season on The CW? The television vulture is watching all the latest cancellation and renewal news, so this page is the place to track the status of Whose Line Is It Anyway?, season 19. Bookmark it, or subscribe for the latest updates. Remember, the television vulture is watching your shows. Are you?

Airing on The CW television network, the Whose Line Is It Anyway? TV show is hosted by Aisha Tyler and each episode typically features Ryan Stiles, Wayne Brady, Colin Mochrie, and a guest performer. The foursome tests their comedic reflexes by participating in a series of spontaneous improv games. After each round, Tyler doles out points to the performers and she then declares a winner at the end of every episode (not that the points matter). Guests in season 18 (the 10th on The CW) include Heather Ann Campbell, Jeff Davis, Keegan-Michael Key, Nyima Funk, Greg Proops, Heather Anne Campbell, Kevin McHale, and Laila Ali.

The 18th season of Whose Line Is It Anyway? averages a 0.08 rating in the 18-49 demographic and 584,000 viewers. Compared to season 17, that’s down by 47% in the demo and down by 32% in viewership in the live+same day ratings (including DVR playback through 3:00 AM). While these numbers don’t include further delayed or streaming viewing, they are a very good indicator of how a show is performing, especially when compared to others on the same channel. There can be other economic factors involved in a show’s fate, but typically the higher-rated series are renewed and the lower-rated ones are cancelled. Find out how Whose Line Is It Anyway? stacks up against other CW TV shows.

Will The CW cancel or renew Whose Line Is It Anyway? for season 19? This show has become a staple of the network’s schedule and this revival is in its 10th year on The CW. Unless the main players want to stop making it, I don’t think that it will be cancelled. I’ll update this page with breaking developments. Subscribe for free alerts on Whose Line Is It Anyway? cancellation or renewal news.

What do you think? Do you hope that the Whose Line Is It Anyway? TV show will be renewed for a 19th season? How would you feel if The CW cancelled this TV series, instead?

Really miss the comic relief of “Whose Line”. In the Twin Cities area the show aired on The CW channel. Hoping the show will be renewed and air again. The cast are hilarious.

Love those guys! They are comic geniuses!