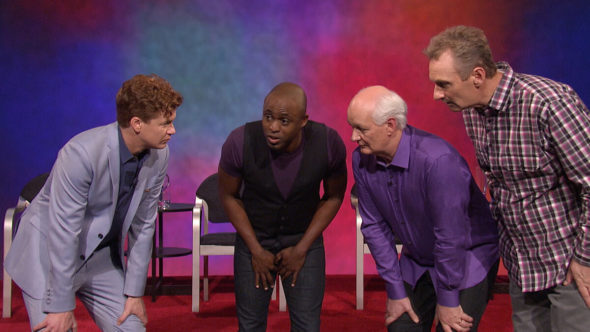 Maybe the points count more than the ratings. Has the Whose Line Is It Anyway? TV show been cancelled or renewed for a 20th season on The CW? The television vulture is watching all the latest cancellation and renewal news, so this page is the place to track the status of Whose Line, season 20. Bookmark it, or subscribe for the latest updates. Remember, the television vulture is watching your shows. Are you?

A comedy improv series airing on The CW television network, the Whose Line Is It Anyway? TV show is hosted by Aisha Tyler. Each episode typically features show veterans Ryan Stiles, Wayne Brady, Colin Mochrie, as well as a guest performer. The foursome tests their comedic reflexes by participating in a series of spontaneous improv games. After each round, Tyler doles out points to the performers and she then declares a winner at the end of every episode (not that the points matter). Guests in season 19 (the 11th on The CW) include Jonathan Magnum, Padma Lakshmi, Darren Criss, and Gary Anthony Williams.

The 19th season of Whose Line Is It Anyway? averages a 0.08 rating in the 18-49 demographic and 523,000 viewers. Compared to season 18, that’s up by 2% in the demo and down by 10% in viewership in the live+same day ratings (includes DVR playback through 3:00 AM). While these numbers don’t include further delayed or streaming viewing, they are a very good indicator of how a show is performing, especially when compared to others on the same channel. There can be other economic factors involved in a show’s fate, but typically the higher-rated series are renewed and the lower-rated ones are cancelled. Find out how Whose Line stacks up against other The CW TV shows.

Will The CW cancel or renew Whose Line Is It Anyway? for season 20? The network is now owned by Nexstar and is shifting toward using more acquired and inexpensive original programming to fill the schedule. This show fits well with that strategy, so I think it’s more than likely that Whose Line will be renewed. I’ll update this page with breaking developments. Subscribe for free alerts on Whose Line cancellation or renewal news.

What do you think? Are you glad that the Whose Line Is It Anyway? TV show has been renewed for a 20th season? Are you sorry that season 20 will be the end of this CW series?