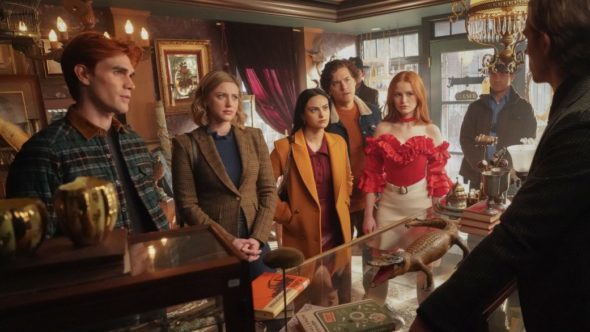 It looks like Pop’s Diner is getting ready to close up permanently.  The CW has announced that the upcoming seventh season of Riverdale will be the show’s end.

Airing on Sunday nights, the sixth season of Riverdale averages a 0.06 rating in the 18-49 demographic and 237,000 viewers in the live+same day ratings (includes all DVR playback through 3:00 AM). Compared to season five, that’s down by 49% in the demo and down by 49% in viewership.  In the live+7day ratings, the season’s been averaging 486,000 viewers.

Numerous CW shows were cancelled earlier this month without a proper finale but Riverdale won’t suffer that same fate.

CW chairman and CEO Mark Pedowitz said today that he believes that seven years is the proper time to end the show. “I am a big believer in giving series that have had a long run an appropriate send-off. We had a long conversation with Roberto [Aguirre-Sacasa] yesterday and he is thrilled with the decision… We are going to treat the show in the manner it deserves. It’s been an iconic pop culture star and we want to make sure that it goes out the right way.”

Riverdale’s final season will kick off at some point in early 2023. Despite that late start, Pedowitz says that he expects the series to have a full final season.

What do you think? Do you keep up with the Riverdale TV series on The CW? Will you be sad to see this dark drama end or, is seven seasons enough?

Given last week’s carnage at CW – and the fact that the network probably won’t exist at all by next year at this time – it’s the completely sensible thing to do. Write your own ending, give yourself a full season to play it out, and don’t be left on the ground bleeding like most of the other CW shows are now.

Now if only they can get through the final season without any more lame musical episodes, and lets hope Percy Prickface (or whatever his name is) is long gone by then.