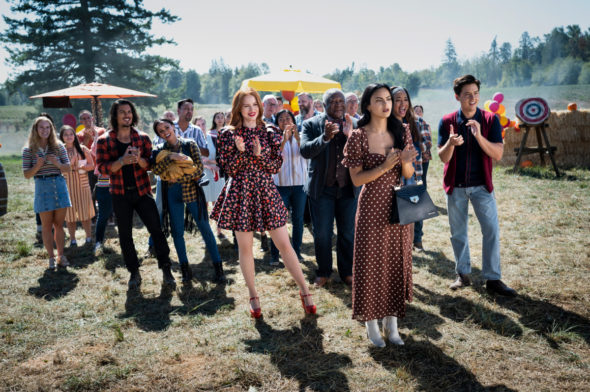 Life will likely get even stranger for Archie and his friends in the 2022-23 television season. Riverdale has been renewed for a seventh season on The CW network. The sixth season recently resumed on Sunday nights.

The sixth season of Riverdale averages a 0.07 rating in the 18-49 demographic and 286,000 viewers in the live+same day ratings (includes all DVR playback through 3:00 AM). Compared to season five, that’s down by 38% in the demo and down by 38% in viewership.

What do you think? Are you glad to hear that the Riverdale TV series has been renewed for a seventh season? Have you kept up with this CW TV show?

I personally, just my own opinion, think Riverdale thought that season 6 would be their last. Why else would they have Jumped the shark a million times over??? Now that they been approved for a seventh season, I don’t even know how they come back. They already did the 7 year time gap, and let’s not talk about Archie’s house? It’s just so ridiculous from a show I started out loving.

Thank God Riverdale is gonna have a season 7. I wish for a little better plots, and of course for jughead and Betty to get back together.their relationship was strong,they went through a lot together . They may have only slept together a few times but that’s what made them great!!they had more of an emotional connection than a physical one. Yes them being physical is awesome but it’s not all there is to a relationship . Also they need to bring FP back for an episode or two.