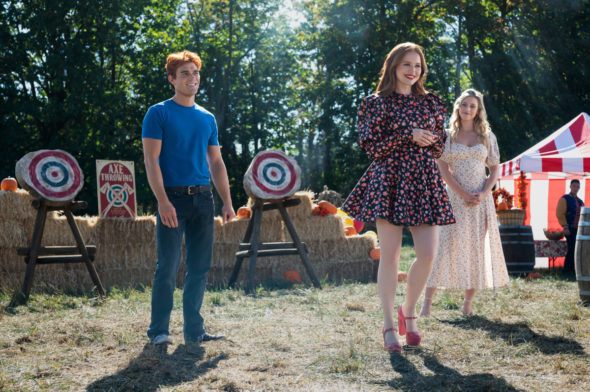 Can Archie and his friends ever return to simpler times? Has the Riverdale TV show been cancelled or renewed for a seventh season on The CW? The television vulture is watching all the latest cancellation and renewal news, so this page is the place to track the status of Riverdale, season seven. Bookmark it, or subscribe for the latest updates. Remember, the television vulture is watching your shows. Are you?

Airing on The CW television network, the Riverdale TV show stars KJ Apa, Lili Reinhart, Camila Mendes, Cole Sprouse, Madelaine Petsch, Madchen Amick, Casey Cott, Charles Melton, Drew Ray Tanner, Vanessa Morgan, and Erinn Westbrook. Based on the characters from the Archie Comics, this show focuses on the seemingly quiet town of Riverdale and some of its residents, including Archie Andrews (Apa), Betty Cooper (Reinhart), Veronica Lodge (Mendes), and Jughead Jone (Sprouse). They discover the darkness and dangers that bubble underneath their town’s wholesome façade. In a five-episode event that begins season six, a new day dawns in the town of RiverVALE. Everything is as it should be but this serenity will surely not last.

The sixth season of Riverdale averaged a 0.05 rating in the 18-49 demographic and 232,000 viewers in the live+same day ratings (includes all DVR playback through 3:00 AM). Compared to season five, that’s down by 52% in the demo and down by 50% in viewership. While these numbers don’t include further delayed or streaming viewing, they are a very good indicator of how a show is performing, especially when compared to others on the same channel. There can be other economic factors involved in a show’s fate, but the higher-rated series are usually renewed and the lower-rated ones are cancelled. Find out how Riverdale stacks up against other CW TV shows.

Will The CW cancel or renew Riverdale for season seven? The network keeps renewing most of its shows but no show runs forever. I suspect that Riverdale will be renewed but is getting close to the end of its run. I’ll update this page with breaking developments. Subscribe for free alerts on Riverdale cancellation or renewal news.

3/22/22 update: Riverdale has been renewed for a seventh and final season on The CW.

What do you think? Are you glad the Riverdale TV show has been renewed for a seventh season? How would you feel if The CW had cancelled this TV series, instead?