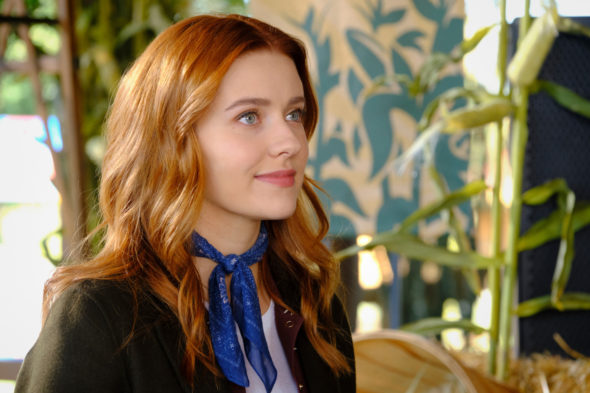 Will Nancy crack the mystery of how to attract more viewers to her show? Has the Nancy Drew TV show been cancelled or renewed for a fourth season on The CW? The television vulture is watching all the latest cancellation and renewal news, so this page is the place to track the status of Nancy Drew, season four. Bookmark it, or subscribe for the latest updates. Remember, the television vulture is watching your shows. Are you?

Airing on The CW television network, Nancy Drew stars Kennedy McMann, Scott Wolf, Leah Lewis, Maddison Jaizani, Tunji Kasim, Alex Saxon, and Riley Smith. Nancy Drew (McMann) is a brilliant teenage detective whose sense of self had come from solving mysteries in her hometown of Horseshoe Bay, Maine – until her mother’s untimely death derails Nancy’s college plans. She and her close friends, aka the Drew Crew, ultimately discover the stunning truth about Lucy Sable, the ghost who’d been haunting Nancy. The third season brings Nancy and her friends standalone cases, new love interests, and emotional journeys of self-discovery – culminating in a showdown with Temperance, which results in a shattering turn that will profoundly change all of their lives.

The third season of Nancy Drew averaged a 0.05 rating in the 18-49 demographic and 349,000 viewers in the live+same day ratings (includes all DVR playback through 3:00 AM). Compared to season two, that’s down by 35% in the demo and down by 24% in viewership. While these numbers don’t include further delayed or streaming viewing, they are a very good indicator of how a show is performing, especially when compared to others on the same channel. There can be other economic factors involved in a show’s fate, but the higher-rated series are usually renewed and the lower-rated ones are cancelled. Find out how Nancy Drew stacks up against other CW TV shows.

Will The CW cancel or renew Nancy Drew for season four? While the show is based on a beloved brand, the traditional ratings haven’t been great. The show’s ratings often double when delayed live+7 day viewership is factored in and presumably, the series sees a good-sized bump in streaming.  Given that the series is spinning off another show, Tom Swift, I would think that it’s sure to be renewed. However, The CW is up for sale so the network’s business model is likely to change once it’s no longer owned by Warner Bros. and ViacomCBS (the studios which supply much of its programming).  I think Nancy Drew’s fate is very much up in the air.  I’ll update this page with breaking developments. Subscribe for free alerts on Nancy Drew cancellation or renewal news.

3/22/22 update: Nancy Drew has been renewed for a fourth season on The CW.

What do you think? Are you glad that the Nancy Drew TV show has been renewed for a fourth season? How would you feel if The CW had cancelled this TV series, instead?

Nancy Drew has been very entertaining. I love all the characters and the plots Please renew for season 4!!

I hope it is renewed

Please renew Nancy Drew for season 4. I love this show!

Please keep the show…love from india

Nancy Drew needs renewed for season 4. It is the best show on cw now.

I will be hurt if Nancy Drew doesn’t get renewed

I’m would like for Nancy Drew to be on for many years, it’s so hard to find a show that is actually entertaining that anyone can watch, not just adults or children! I love this show and hope it will have many great shows in the future

I am so hoping that there is going to be season 4 as there are 30 of us that get together to watch the show together and try to work the mystery out, we all love the show and the actors in the show are great

Great show! Hope it runs for season 4 and more!

My teenage girls and I love and watch this show weekly. Cancel. NO! If they want to cancel something it should be RiverVale..(or at least tell the writers to go back to the first season and repeat their genius from then)

I really like this show. Hopefully, they will renew it again.