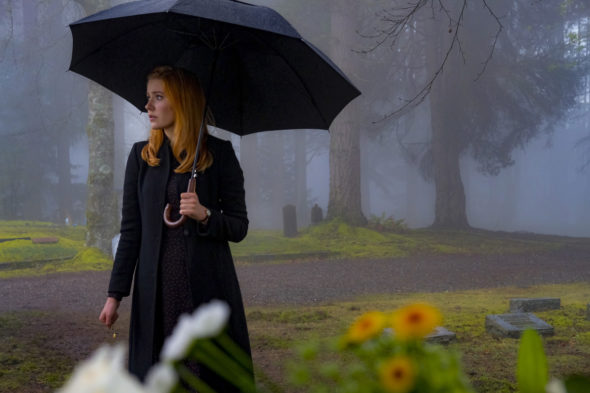 Will the mysteries be solved in the first season of the Nancy Drew TV show on The CW? As we all know, the Nielsen ratings typically play a big role in determining whether a TV show like Nancy Drew is cancelled or renewed for season two. Unfortunately, most of us do not live in Nielsen households. Because many viewers feel frustration when their viewing habits and opinions aren’t considered, we invite you to rate all of the first season episodes of Nancy Drew here. *Status update below.

A mystery drama series on The CW, Nancy Drew stars Kennedy McMann, Scott Wolf, Alex Saxon, Leah Lewis, Maddison Jaizani, Tunji Kasim, Riley Smith, and Alvina August. Nancy Drew (McMann) is a brilliant teenage detective whose sense of self had come from solving mysteries in her hometown of Horseshoe Bay, Maine – until her mother’s untimely death derails Nancy’s college plans. Devastated by her mother’s passing, Nancy swears off crime-solving while waiting until she can re-apply to college. But when a socialite is murdered, Nancy finds herself a prime suspect in the crime, along with a group of other teens present at the scene. A supernatural presence begins to haunt Nancy’s investigation, she discovers that the current crime has a connection to the long-unsolved murder of a local girl.

What do you think? Which season one episodes of the Nancy Drew TV series do you rate as wonderful, terrible, or somewhere between? Do you think that Nancy Drew on The CW should be cancelled or renewed for a second season? Don’t forget to vote, and share your thoughts, below.

*1/7/20 update: Nancy Drew has been renewed for a second season on The CW.

Love that show,the season just needs to be longer.

CAN NOT WAIT FOR NEXT SEASON. HOP EITS HAS AS MANY TWIST S & SCARY GHOST AS THE FIRST SEASON.

Can’t wait for season 2 to be out

My husband and both love Nancy drew. We are both in our late 50. Can’t wait to see what happens next. So sad Nancy’s new love had to die.