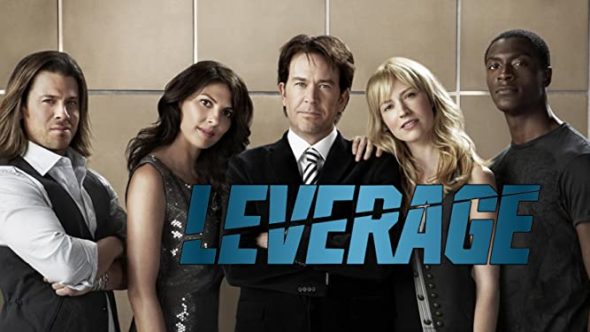 Leverage is coming back! The TNT series is being revived by IMDb TV for a 13 episode season, and four cast members of the original outing are turning for the revival. The only difference will be the leading man. Noah Wyle will lead the series. Timothy Hutton was in charge of the cast of characters last time the series aired. Beth Riesgraf, Gina Bellman, Christian Kane and Aldis Hodge are all returning for the series.

Dean Devlin is also in charge of the revival, and he spoke about bringing the former TNT series back to IMDb TV. Per Deadline, he said the following:

“Since the day it was cancelled, I’ve longed to return to the world of Leverage. The show, the characters, the cast and the people who made it happen all hold a very special place in my heart. Our new series with Amazon Studios and IMDb TV is a re-imagining of the original premise.  While Leverage centered on a crusade to avenge the death of a child, this series is propelled forward as a redemption story of misdeeds that need amends. I could not be more excited and fired up about returning to the world of Hitter, Hacker, Grifter, Thief!!”

What do you think? Will you watch the revival of Leverage?

I hate to sound stupid, but exactly what channel is IMDb. I thought it was just a list of different shows, not a station.

ABSOLUTELY!! I love the original series and I am super happy that the original cast is back and I also think that adding
Noah wyle is excellent casting he is very likable.

No freaking way will I watch this new series. I love Noah Wylie but without Hutton it’s an absolute no watch

Most definitely wouldn’t miss it, and although I also love Noah I am gonna miss Timothy Hutton so much I really hope this works out for the best and he’s able to come back they are family it’s hard to replace family you can add to em but not take any away can’t wait been waiting seems like forever as it is and thank you for bringing back one of the best shows ever made thank you so much .

This was one heck of a series. It was fun to watch!

YES, I’ve seen all episodes and tape them whenever I see it’s on

I am so excited to read this! What a great series!

Please bring leverage back. It is one of our favorite programs. There is nothing on now that can replace it.

My prayers are coming true
As soon as all these reboots started coming out Leverage was the show that NEEDS to come back
Thank you!
I can not even express how excited I am

Looking forward to the revised schedule for the series.

So Excited! I can’t wait!

No way. Timothy Hutton made that show, it won’t be the same without him.