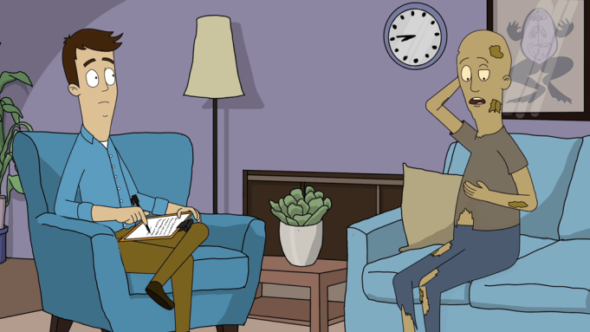 IMDb is breaking into original content. The website just announced their first-ever scripted TV show, You’re Not a Monster.

You’re Not a Monster debuts on IMDb this fall.

IMDb Announces Its First-Ever Scripted Series: The Animated Show “You’re Not a Monster,” Premiering This Fall On IMDb and IMDb TV

LOS ANGELES — IMDb (www.imdb.com), the world’s most popular and authoritative source for movie, TV and celebrity content, today announced its first-ever animated series: You’re Not a Monster (www.imdb.com/monster). Fans will get a sneak peek of the 10-episode, short-form series when its trailer premieres on the IMDboat at Comic-Con International: San Diego later this month, and full episodes will premiere this fall. The show joins other IMDb original series now airing including “The IMDb Show,” “IMDbrief” and “Casting Calls.”

You’re Not a Monster demonstrates that even classic movie monsters have emotional issues – because the only thing worse than being undead is being unloved. Returning to the “therapist’s chair” for the first time since Frasier, Kelsey Grammer voices a former psychiatrist-turned-vampire in the series, who mentors his great-great grandson “Max” (Eric Stonestreet), a therapist who has inherited his practice. In each 4 to 5 minute episode, Max treats classic monsters including Frankenstein, The Invisible Man and Medusa as they seek desperately needed therapeutic help. Rounding out the series cast is Aparna Nancherla as a demon receptionist, Ellie Kemper as a therapist who thinks Max is imagining everything, and Peter Grosz, Langston Kerman, Joel Kim Booster, Patton Oswalt, Adam Pally, Amber Ruffin, Amy Sedaris and Milana Vayntrub as hideous monsters. Show creators and cast members including Grammer and Nancherla will participate in an exclusive interview with host Kevin Smith on the IMDboat at San Diego Comic-Con on July 20.

“Monsters are people, too,” said Grammer, who serves as executive producer of the series and has voiced popular characters in projects including Gary the Rat, Storks, Trollhunters: Tales of Arcadia and several decades as “Sideshow Bob” on The Simpsons.

The comedy series is created and written by 4-time Emmy-winner Frank Lesser (The Colbert Report) and Lily Stuart Streiff serves as Animation Director. “As a movie fan, I’ve always loved IMDb and am excited to work with them to humanize these inhuman creatures,” said Lesser. “Plus, I figured this would be the easiest way to get another credit on my IMDb page. You’re Not a Monster is a show with a lot of heart. And, yes, sometimes that heart is lying in a pool of blood, but it still looks adorable thanks to Lily’s Streiff’s delightful character design.”

“We are thrilled to offer a new original comedy series to our fans as we shine a light on the daily struggles faced by classic movie monsters,” said Steve Bernstein, GM of IMDb Video. “You’re Not a Monster is not only the first-ever animated series for IMDb, but also our first scripted program, and introducing the show on the IMDboat at San Diego Comic-Con is the perfect place to share its fun narrative alongside members of the incredible cast.”

Beginning this fall, viewers can catch the premiere episode of You’re Not a Monster at www.imdb.com/monster, on the IMDb TV free streaming video channel, and on the IMDb iOS and Android apps. Fans will also receive regular updates and show content on the IMDb Facebook, YouTube, Twitter and Instagram channels.

You’re Not a Monster is produced for IMDb by Bold Soul Studios, Grammnet and Ranker in Los Angeles, California.

About IMDb
IMDb is the world’s most popular and authoritative source for information on movies, TV shows and celebrities. Products and services to help fans decide what to watch and where to watch it include: the IMDb website for desktop and mobile devices; apps for iOS and Android; and IMDb X-Ray on Fire TV devices. IMDb also operates a free streaming channel, IMDb TV, and produces original video series including “The IMDb Show” “IMDbrief,” and “Casting Calls,” in addition to on-location coverage of major events. For entertainment industry professionals, IMDb provides IMDbPro and Box Office Mojo. IMDb is an Amazon company. For more information, visit www.imdb.com/press and follow @IMDb.

About Grammnet
Almost 25 years ago, Kelsey Grammer created Grammnet Productions, a TV production company which has produced such hit television shows as the Emmy(R)-winning “Medium,” for NBC and “The Game” and “Girlfriends” for CW. Additional Grammnet producing credits include the NBC productions “The Innocent,” “Kelsey Grammer Salutes Jack Benny,” “Fired Up,” “In-Laws” and “Gary the Rat.” For PAX, he produced “World Cup Comedy.” For FOX, he starred in and produced “Kelsey Grammer Presents: The Sketch Show.” Kelsey’s recent producing credits include the Golden Globe winning “Boss” for Starz and “Light as a Feather,” entering its second season for Hulu.

What do you think? Are you a fan of animated series? Will you check out You’re Not a Monster?

NO I DONT WANT THAT SHOW ON IT IS COMING ON THIS MONDAY I DONT LIKE SHOWS LIKE THAT,,I LIKE TO WATCH MY FUNNY SHOWS………….PUT IT SOME OTHER PLACE PLEASE