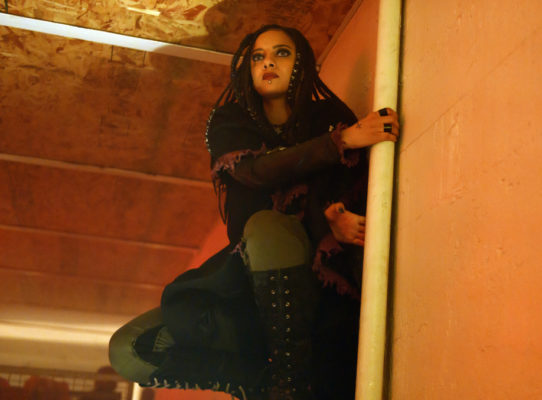 Leverage has added a new face to its cast. Aleyse Shannon, who appeared on 11 episodes of Charmed on The CW, has joined the cast as a regular member for the IMDb TV series revival. She’ll play the sister of original series character Alec Hardison (Aldis Hodge). Hodge will recur on the Leverage revival because he’s the lead on Showtime’s City on a Hill series.

On Leverage, the characters are former criminals that try to right wrongs for people who need help.  Beth Riesgraf, Gina Bellman, and Christian Kane return for the revival with Noah Wyle joining the cast.

“Breanna’s special skills include being a genius mechanical engineer (just ask her about her drones) and making social hacking and social media manipulation look like child’s play. Landing in the foster system after her parents’ tragic car accident, Breanna got lucky finding a home with Nana, and bonus big-brother Hardison (Hodge), who reached out to the spiky, scared 10-year old by teaching her computers and hacking. As Breanna trains in new skills with the other Leverage team members, she will need to learn to embrace and trust her new family.”

Leverage is currently in its second week of production.

What do you think? Are you a fan of the Leverage TV series? Will you watch the revival on the IMDb TV streaming service?

I think it’s great!! I look forward to it

I Can’t WAIT!!! Leverage was my show, I loved how 5 different people/personality came together…

I am so excited about Leverage. One of my favorite shows!!!!!

Can wait come back one of my favorite shows so excited for. So good premiere date hopefully soon as possible.

Im so glad its coming back. I thoughtthat was good television.

Love the show i watch the origional all the time i im a kaneiac i love christain kane ,his character Eliot and his music which i listen too every day i love all the cast members parker is another fave