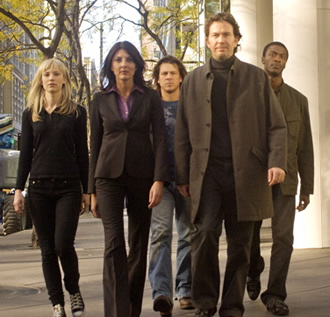 TNT has given the go-ahead for another season of their action-filled drama, Leverage.

According to the cable channel, the current season of Leverage is averaging 4.1 million viewers so far this year. The series has shown growth in the younger demographic over last season’s installments. The 16 episode season began in late June and is expected to conclude in late September.

Leverage has now been renewed for a fourth season of 15 episodes. They’ll air sometime in 2011.

What do you think? Are you glad to hear that Leverage is coming back for year four? Who’s your favorite character on the team?

please bring back leverage love it

I’m constantly disappointed when “other” networks cancel my shows. So far TNT has not let me down. I love Leverage, Rizzoli and Isles, and Falling Skies. Don’t let me down. TNT is my favorite.

I love this show, it is hard to choose a favorite character because they are all so good, but I love the love tension between Nate and Sophie and between Parker and Hardison, they just all keep you guessing if they are going to get together ever, I know Nate and Sophie did but they still keep a certain mystery about them it pretty cool. Elliot is awesome, he is so handy to have around. The episodes are all great and throughly enjoyable, I hope this shows goes on for quite a few more seasons.

I LOVE THIS SHOW AND I HOPE IT CONTINUES

I enjoy leverage, it reminds you the poor and abused can come out on top! Keep leverage ON. I have enjoyed the show since day 1. The show is different and the plotlines make you think!

I’ve been watching this show since the very first episode and i have not missed a single one. I have all the seasons and episodes to date and i watch them again and again all the time because i love the show so much. It’s too hard to choose a favorite character because they all play their parts so well and i couldn’t imagine any other actor/actress playing their roles. I really hope that there are many more seasons to come as i would hate to hear or see this show come to an end because it’s by far one… Read more »