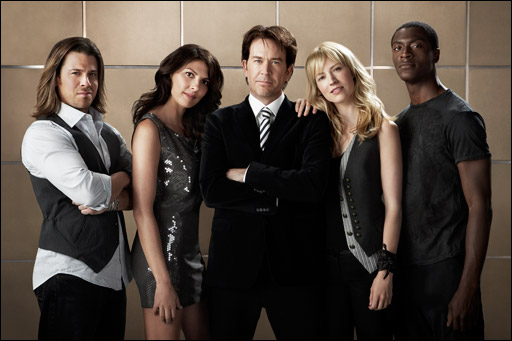 TV show description:
Nathan Ford (Timothy Hutton) was once a loyal fraud investigator for IYS Insurance. His point of view changed when the insurance company refused to pay for an experimental treatment that could have saved his young son. Because of his intricate knowledge of scams, Nathan’s recruited by Victor Dubenich to join a team of talented criminals to “steal back” aeronautical plans that were supposedly stolen by a competitor.

When the job is completed, Dubenich tries to double-cross the team and unsuccessfully tries to blow them up. The group decides to run a con on their former employer and Dubenich ends up ruined and arrested by the FBI. When the team is done, they form Leverage Consulting & Associates and start to help everyday people who’ve been ripped off by corrupt corporations and government agencies.

Among Nathan’s colleagues is Sophie Devereaux (Gina Bellman), a con-woman who uses her acting skills for art thievery. Ironically, though she’s very successful as an actress for the team’s scams, she has little success as a legitimate performer.

Eliot Spencer (Christian Kane) is a highly-skilled martial artist who is also a weapons and retrieval expert. He shows great proficiency with guns, yet despises them.

Alec Hardison (Aldis Hodge) is a computer hacker extraordinaire and a gadget guru. A self-proclaimed geek, he also has a penchant for science fiction. Parker (Beth Riesgraf) doesn’t have a known first name, and is a thief, cat burglar, and explosives expert. She also has an unnatural love of money, and a soft spot for Alec and children. She and Alec share the common bond of both being raised by foster parents.

Series Finale:
Episode #77 — The Long Goodbye Job
The team embarks on their riskiest con yet when Nate takes a case linked to his son’s death.
First aired: December 25, 2012

What do you think? Do you like the Leverage TV series? Are you glad that it’s being revived on IMDb TV?

Leverage, Psych, Monk were and are still among the greatest shows of at least the last 40yrs. Leverage has everything to include us and allow thinking. What we have today is how much stupid, money, wasted time, incomplete thinking, wrong directions, selfishness, greed and debauchery can be placed in every episode and every scene. LEVERAGE is the new old beginning.

Pleasant surprise, Leverage 2.0 LOL! Will Miss Hutton, loved his fathers work…Love Noah too. Leverage was a fun premise we hope this will be as enjoyable. We need hero’s even more now.

P.S. Paradise is growing on us…who doesn’t love Christian and his fighting “abilities”… for tv. Plus it will be fun seeing more of our city on tv.

Yesss!!! Loved Leverage, wstched reruns in ION & other channels lste st night; one Christmas I even got a DVD set! WHEN is the reboot premiering? Please?!?!

I am so excited about Leverage coming back on I love it!!!!!!

I couldn’t be more excited about Leverage 2.0! I have watched every episode of the original more times than I can count. I love Christian Kane (I am a Kaniac), Aldis Hodge, Beth Reisgraf, Timothy Hutton (whom I will miss dearly) and Gina Bellman. I did enjoy Almost Paradise! It was great to see Christian in something other than reruns. Mr Dean Devlin you are THE MAN!

Glad to hear about that. Reruns get a little less interesting after 3 or 4 times.

Just finished watching all seasons for the second time. Love the heart of the show, the concept, the characters, the teamwork, the cast, the writing, the witty plots and twists. One of my favorite all time tv shows, so excited to hear of a revival!

I love Leverage so much that I bought the entire series and have binge watched it 5 times in a row, each time trying to analyze the scheme that they are working on.
I really wish someone would develops new seasons… Even if is just with Eliot, Parker and Hardison. I bet it would still be great.

I loved getting up every day and watching Leverage before my day really got started. It always had my full attention and the way they worked together was amazing!! Put this great show back on ION!!!!!

Put Leverage back on!

Is this great show FINALLY coming back? or is this a bad joke to get everyone excited about one of the best Shows to ever be on Television. What was this 2019 cast the way they look now all about then?