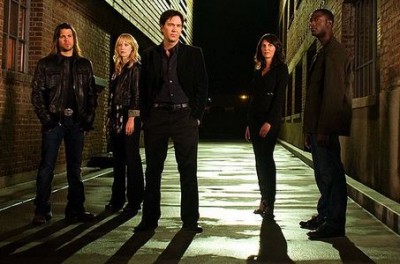 leverage is very entertaining that I watched all the time, and will do again if brought back. thanks

I love leverage please, please keep it on I am trying to find the reruns they took that off as well. I watched it every Sunday on 29,Every Sunday never miss it I tried going online can someone tell me how to get the old shows thank you because that’s my show. Love you so much please, please, please come back soon… Thank you…

Loveeeee the show i glue my self to the couch when the show its on!!

Im glad! love the show i sit there all day an watch episode after episode!

I hate TNT. I hope they go under like the Oxygen channel did. They deserve far worse, but I’ll accept that for getting rid of LEVERAGE. What kind of idiot had this foxlike idea to cancel a great show for junk “reality” tv? I bet those shows didn’t do better than LEVERAGE in ratings. I used to watch SUPERNATURAL before work, but when they cancelled my show I have since scortched earth with TNT. May the stations ratings only plummet until all the excecutives lose their jobs. 😀

Still shocked that LEVERAGE was canceled! There are but a few, entertaining, funny, witty and captivating shows left on TV for mature adult audiences. PLEASE BRING IT BACK!!

please tell me i haven’t missed the new shows. saw a couple of ads saying it was coming. WHEN? can hardly wait. love the plots, characters, and actors. Parker blows me away. Loved Timothy Hutton in “Nero Wolfe” and was happy to see him in another series.

The show was cancelled. You’re reading an older post.