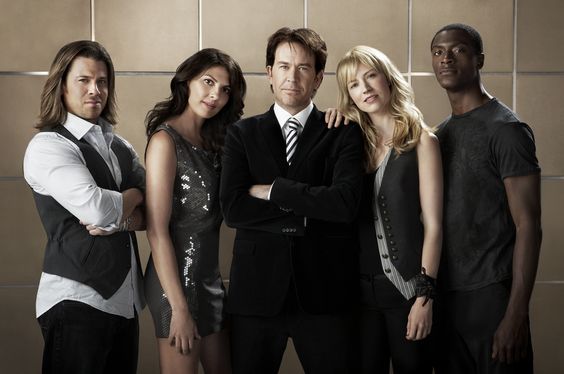 Leverage is coming back, and the revival now has its own title – Leverage: Redemption. Aldis Hodge spoke about reviving the popular TNT series in a recent interview with Collider. Beth Riesgraf, Gina Bellman, and Christian Kane are also returning from the original series, and Noah Wyle and Aleyse Shannon have joined the cast for the revival.

A premiere date for the revival, set for IMDb TV, has not been revealed, but it will likely arrive later this year. Hodge said the following about potentially doing more of Leverage: Redemption:

“Yeah, if [Leverage] continues and [my] schedule allows and permits. The first series for Leverage, I hold it near and dear to my heart. It’s something that we all built, and living in the wake of its legacy, Leverage, now entitled Leverage: Redemption, is definitely something that I plan to continue with, just for the nostalgia of it. I know the fans love it and I have fun with it. We have a great new cast. We have a new cast member, her name is Aleyse Shannon and she’s really fantastic. We also have Noah Wyle, as one of our cast members. Aleyse comes on playing my adopted little sister. She’s a really bright light with great energy, and I’d love to see where she’s at. I really wanna see where their brother-sister relationship goes.”

Hodge spoke about the fan support the original series had, and that is a big reason for the revival moving forward. Series producer Dean Devlin had just been looking for the right home for the series and Amazon’s IMDb TV is that home. The revival began production in August.

What do you think? Are you excited to see Leverage: Redemption when it arrives on IMDb TV later this year?

Please renewed another season look forward bring back good spy drama not same without Tim Hutton is the best character in this show.