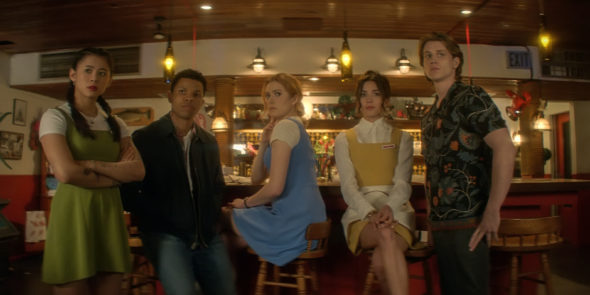 Does Nancy have a ghost of a chance at solving these mysteries?  Has the Nancy Drew TV show been cancelled or renewed for a second season on The CW? The television vulture is watching all the latest cancellation and renewal news, so this page is the place to track the status of Nancy Drew, season two. Bookmark it, or subscribe for the latest updates. Remember, the television vulture is watching your shows. Are you?

Airing on The CW television network, Nancy Drew stars Kennedy McMann, Scott Wolf, Alex Saxon, Leah Lewis, Maddison Jaizani, Tunji Kasim, Riley Smith, and Alvina August. Nancy Drew (McMann) is a brilliant teenage detective whose sense of self had come from solving mysteries in her hometown of Horseshoe Bay, Maine – until her mother’s untimely death derails Nancy’s college plans. Devastated by her mother’s passing, Nancy swears off crime-solving while waiting until she can re-apply to college. But when a socialite is murdered, Nancy finds herself a prime suspect in the crime, along with a group of other teens present at the scene. A supernatural presence begins to haunt Nancy’s investigation, she discovers that the current crime has a connection to the long-unsolved murder of a local girl.

The first season of Nancy Drew averaged a 0.14 rating in the 18-49 demographic and 685,000 viewers. Find out how Nancy Drew stacks up against other The CW TV shows.

Will The CW cancel or renew Nancy Drew for season two? The ratings aren’t great but, given the title character’s name recognition, I think it will be renewed anyway. For now, I’ll keep an eye on the ratings and update this page with breaking developments. Subscribe for free alerts on Nancy Drew cancellation or renewal news.

1/7/20 update: Nancy Drew has been renewed for a second season on The CW.

What do you think? Are you glad that the Nancy Drew TV show has been renewed for a second season? How would you feel if The CW had cancelled this TV series, instead?

They’ve made a really good mystery here! I hope CW keeps it up because they need good shows like this to keep me watching. I love mysteries.

I have always loved the Nancy Drew books. This show should not be named that. It doesn’t represent the books. It’s an interesting show but it’s name should be different.

I enjoy watching Nancy Drew. I’d rather watch that then Stump town. Not interested in that at all. Looked forward to 9 on a Wed night, and all of a sudden it wasn’t on any more. What’s up with that. Things are boring enough having to stay home during Covid and then you take something of interest of the air. Grrrr. Lolol

I keep watching for the NDM every week. One of the best mysteries on TV! When will New season start?

I’m happy with Nancy Drew it always keeps me on the edge of my seat. I hope you renew it for the 2nd season.

I think it would suck if it was canceled.

I am so happy Nancy Drew is being renewed!!! I live this show!!!!

I do not care for Nancy Drew character wise. Her persona is a bit annoying…. if that is the right descriptive word to use. But her friends are wicked awesome and without them, I do not think I would watch the show. They all bring a dynamic to it that keeps me pulled in. The story lines are good too, I just do not care for the persona of this Nancy Drew. You can’t please everyone though. However, I am truly hooked!! I will continue to watch faithfully. Binged it over a weekend. Please renew.

I think this show hooked me just as the show Lost did. I Love Nancy Drew. I hope they don’t cancel it. I think it would have a better following if it had a different name.

I look forward to Nancy Drew every week, I read the books and granted this is a little different I love it so please keep it on it’s one of only shows I watch on regular TV.

I agree. Yes, Nancy is a bit annoying, but I like her friends, especially George. There are so few shows that don’t suck. Today you just can not get away from shows that push Hollywood liberal politics on you, and I just hate that. This show is actually fun.