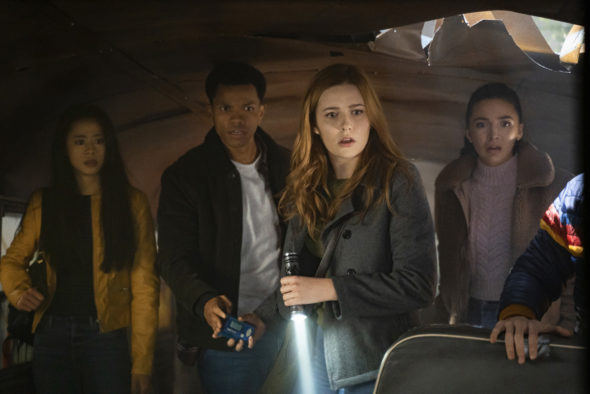 What’s ahead for these “meddling kids”? Has the Nancy Drew TV show been cancelled or renewed for a third season on The CW? The television vulture is watching all the latest cancellation and renewal news, so this page is the place to track the status of Nancy Drew, season three. Bookmark it, or subscribe for the latest updates. Remember, the television vulture is watching your shows. Are you?

Airing on The CW television network, Nancy Drew stars Kennedy McMann, Scott Wolf, Maddison Jaizani, Alex Saxon, Leah Lewis, Tunji Kasim, and Riley Smith. Nancy Drew (McMann) is a brilliant teenage detective whose sense of self had come from solving mysteries in her hometown of Horseshoe Bay, Maine – until her mother’s untimely death derails Nancy’s college plans. She and her close friends, aka the Drew Crew, ultimately discover the stunning truth about Lucy Sable, the ghost who’d been haunting Nancy. Season two finds Nancy dealing with the aftermath of that discovery and becoming an investigator for the legal practice of her father, Carson (Wolf). This leads to the Drew Crew exploring standalone cases, new romances, and emotional journeys of self-reinvention.

The second season of Nancy Drew averaged a 0.08 rating in the 18-49 demographic and 466,000 viewers. Compared to season one, that’s down by 42% in the demo and down by 32% in viewership. Find out how Nancy Drew stacks up against other The CW TV shows.

Will The CW cancel or renew Nancy Drew for season three? Though the linear ratings aren’t very high, this show reportedly does well in digital viewing. Given that The CW has been renewing most established shows, regardless of the ratings, I think Nancy Drew will be renewed. I’ll update this page with breaking developments. Subscribe for free alerts on Nancy Drew cancellation or renewal news.

2/3/21 update: Nancy Drew has been renewed for a third season on The CW.

What do you think?  Are you glad that the Nancy Drew TV show has been renewed for a third season? How would you feel if The CW had cancelled this TV series, instead?

I love this show!! And am thrilled it’s renewed! Can’t wait for October to come bc I’ll definitely be watching!!

I enjoy this show very much I am glad it has been renewed!!! Can’t wait for next season.

Sorry this show at least for myself is bad ..( It did not stick to the original Nancy Drew stories at all ) ..from the first episode it was a total Blunder and still is a Flop !

I loved the Nancy Drew books growing up…. This show is awful…. what happened to the Ned from the books?