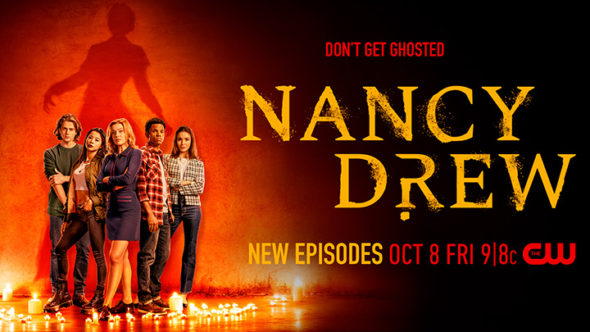 This season, The CW has moved the Nancy Drew series to Friday nights, an evening when TV viewership is typically lower. Could this be the beginning of the end for the Drew Crew? Will Nancy Drew be cancelled or renewed for season four? Stay tuned.  *Status Update Below.

A mystery drama series, the Nancy Drew TV show stars Kennedy McMann, Scott Wolf, Leah Lewis, Maddison Jaizani, Tunji Kasim, Alex Saxon, and Riley Smith. Nancy Drew (McMann) is a brilliant teenage detective whose sense of self had come from solving mysteries in her hometown of Horseshoe Bay, Maine – until her mother’s untimely death derails Nancy’s college plans. She and her close friends, aka the Drew Crew, ultimately discover the stunning truth about Lucy Sable, the ghost who’d been haunting Nancy. The third season brings Nancy and her friends standalone cases, new love interests, and emotional journeys of self-discovery – culminating in a showdown with Temperance, which results in a shattering turn that will profoundly change all of their lives.

What do you think? Do you like the Nancy Drew TV series on The CW? Should it be cancelled or renewed for a fourth season?

I can not wait for season 4 on Nancy drew.. I really wished Nancy stayed with nick

Please renew Nancy Drew!!!! I LOVE this show! The cast is great and the storylines are a fun escape from the crazy world we’re living in now. Definitely deserves a season 4!

Do not cancel Nancy Drew!! The actors work wonderfully together and I certainly look forward to a Season 4!

what the heck is wrong with people downvoting you ? wtf

Please regard my earlier post to reflect the current season.

Why doesn’t Nancy Drew have its own time slot on the CW? I am a fan and have watched the past few series. I have tried to watch season 3 but have not seen a full episode because it has the show before play through. Bad Form! This show is a popular in my household. Please straightened this problem. Actually it would be great if you were to show season 3 as a rerun because we have not been able to watch a single episode. The episode on 10/22/21 The Testimony of the Executed Man was short and the sound… Read more »

Hey 1st of all this show is f*cking good im telling you! Thats my 1st show out of Netflix. Its not on Netflix so some creepy people might thought its underrated no its not! More people should know about this show its just awesome! It has all that thing laugh like crazy cry like just hekk n scare the hell out of us it has all of that things we always look for! Sry bt i can bet if it was on Netflix it might could be the one of the watched show! Sry cw i didnt want to say… Read more »

I loved the show. No show on Friday 10/8 and nothing else scheduled. Is it canceled?

Why was this even renewed?