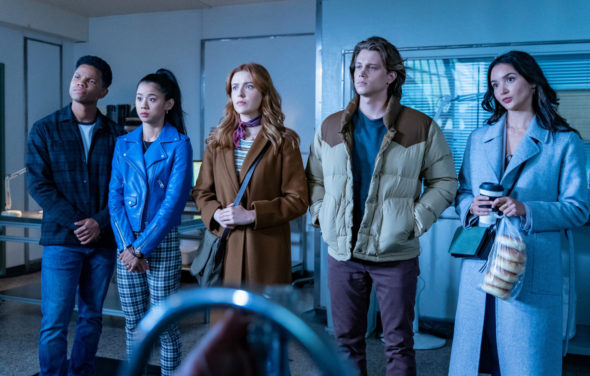 How will the members of the Drew Crew handle their new cases in the third season of the Nancy Drew TV show on The CW? As we all know, the Nielsen ratings typically play a big role in determining whether a series like Nancy Drew is cancelled or renewed for season four. Unfortunately, most of us do not live in Nielsen households. Because many viewers feel frustrated when their viewing habits and opinions aren’t considered, we invite you to rate all of the third season episodes of Nancy Drew here.  *Status Update Below.

A CW mystery series, Nancy Drew stars Kennedy McMann, Scott Wolf, Leah Lewis, Maddison Jaizani, Tunji Kasim, Alex Saxon, and Riley Smith. Nancy Drew (McMann) is a brilliant teenage detective whose sense of self had come from solving mysteries in her hometown of Horseshoe Bay, Maine – until her mother’s untimely death derails Nancy’s college plans. She and her close friends, aka the Drew Crew, ultimately discover the stunning truth about Lucy Sable, the ghost who’d been haunting Nancy. The third season brings Nancy and her friends standalone cases, new love interests, and emotional journeys of self-discovery – culminating in a showdown with Temperance, which results in a shattering turn that will profoundly change all of their lives.

What do you think? Which season three episodes of the Nancy Drew TV series do you rate as wonderful, terrible, or somewhere between? Do you think that Nancy Drew should be cancelled or renewed for a fourth season on The CW? Don’t forget to vote, and share your thoughts, below.

I love this show !! Please do not cancel it !!!! #nancydrewseason4

I absolutely Love Nancy Drew. I am praying and really hoping that they renew for season 4.

Do not cancel nacy drew plzzzz Aleta keep it going

I enjoy the series.when the net work ins tying to hide it. It IS a great mystery series, to watch and to figure ot when it will air.
Season 4 please.

Its a good series! Just dont cancelle it people should know about this show… I just waited so long for s3 now if people dont know its Their bad luck its underrated idk why it have all the things we look for.. Just dont pls dont cancelle it

Yes the show is awesome, please keep it going!