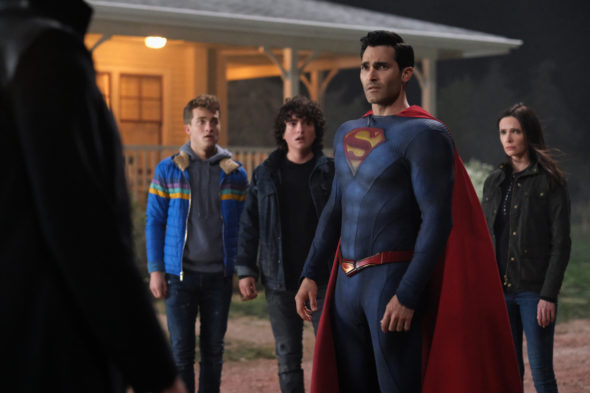 The CW is sticking with the Man of Steel and his family. Superman & Lois has been renewed for a third season on the smallest broadcast network.

A superhero series, the Superman & Lois TV show stars Tyler Hoechlin, Elizabeth Tulloch, Jordan Elsass, Alexander Garfin, Erik Valdez, Inde Navarrette, Wolé Parks, Adam Rayner. Dylan Walsh, and Emmanuelle Chriqui. In the story, Superman aka Clark Kent (Hoechlin) and his award-winning journalist wife, Lois Lane (Tulloch), have gotten married and are now working parents, raising two teen boys. In addition to the usual trials and tribulations of being parents, Clark and Lois must also concern themselves with their sons, Jonathan (Elsass) and Jordan (Garfin), who could inherit their father’s Kryptonian superpowers as they grow older. Returning to Clark’s hometown of Smallville to handle some Kent family business, the family is reacquainted with Lana Lang (Chriqui), Clark’s first love, her Fire Chief husband, Kyle Cushing (Valdez), and their rebellious daughter, Sarah (Navarrette). There’s never a dull moment in the life of a superhero, especially with Lois’ father, General Samuel Lane (Walsh), looking for Superman to vanquish a villain or save the day at a moment’s notice. Meanwhile, the Kents’ lives are upended when both a mysterious stranger (Parks) and impassioned self-made mogul Morgan Edge (Rayner) enter their lives.

What do you think? Have you enjoyed watching the Superman & Lois TV series? Are you glad to hear that it’s been renewed for a third season on The CW?

Great story writing in all shows of season 2,that last one in the alternate world with all the cast members in it was A fantastic story..Keep up the great story’s and love to see it has been picked up for a third season..To me it ranks right up there with.. Smallville”’ and I so much tuned in with all the story’s in that series and superman and lois will to me be ranked along side it …but may even surpass it and that is the making of a great great series

Always in anticipation and looking so forward to watching Superman & Lois! Tyler Hoechlin is the perfect part for Superman! Elizabeth Tulloch (Lois) and son’s Jordan Elsass (Jonathan) Alexander Garfin (Jordan) make this a great cast of people for this show. Love it, keep it going!