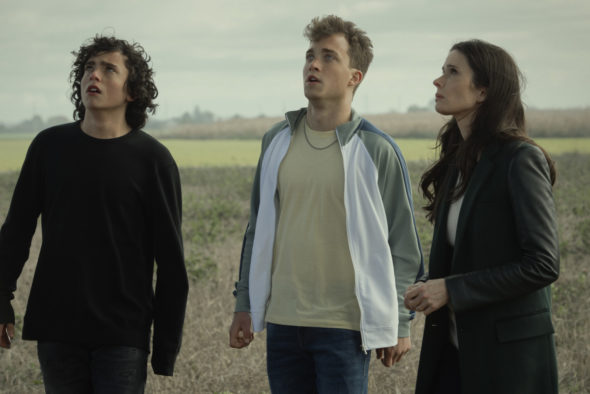 Is it a case of “Father Knows Best” in the first season of the Superman & Lois TV show on The CW? As we all know, the Nielsen ratings typically play a big role in determining whether a TV show like Superman & Lois is cancelled or renewed for season two. Unfortunately, most of us do not live in Nielsen households. Because many viewers feel frustration when their viewing habits and opinions aren’t considered, we invite you to rate all of the first season episodes of Superman & Lois here.  *Status Update Below.

A CW superhero series, the Superman & Lois TV show stars Tyler Hoechlin, Elizabeth Tulloch, Jordan Elsass, Alexander Garfin, Erik Valdez, Inde Navarrette, Wolé Parks, Adam Rayner, Dylan Walsh, and Emmanuelle Chriqui. After years of facing maniacal supervillains, monsters, and alien invaders, the world’s most famous superhero, Superman aka Clark Kent (Hoechlin), and his award-winning journalist wife, Lois Lane (Tulloch), have gotten married and are now working parents, raising two teen boys. In addition to the usual trials and tribulations of being parents, Clark and Lois must also concern themselves with whether or not their sons Jonathan (Elsass) and Jordan (Garfin) could inherit their father’s Kryptonian superpowers as they grow older. Returning to Clark’s hometown of Smallville to handle some Kent family business, Clark and Lois are reacquainted with Lana Lang (Chriqui), Clark’s first love, and her Fire Chief husband, Kyle Cushing (Valdez). The adults aren’t the only ones rediscovering old friendships in Smallville as the Kent sons are reacquainted with Lana and Kyle’s rebellious daughter, Sarah (Navarrette). Of course, there’s never a dull moment in the life of a superhero, especially with Lois’ father, General Samuel Lane (Walsh), looking for Superman to vanquish a villain or save the day at a moment’s notice.

What do you think? Which season one episodes of the Superman & Lois TV series do you rate as wonderful, terrible, or somewhere between? Do you think that Superman & Lois should be cancelled or renewed for a second season on The CW? Don’t forget to vote, and share your thoughts, below.

Season 1 of superman and lois was phenomenal. Tyler, Bitsie and the whole cast were great. Writing, cinematography, direction etc was really good. Great balance between the Superhero and real-life drama. They managed to tell a new story and phase of Superman’s & Lois’s lives but managed to keep what has made both characters so special. Hoping everyone behind this manages to keep what made season one great for season 2.

This is an excellent series..and I loved all the story lines of the first season and glad it was picked up for a season two and so many great story’s can be made as this show goes forward and if the great writing and cast in it continues this will be no doubt be picked up for a third season and more can be more popular then Smallville was with Tom Welling and the great cast and writing that show had..best of luck going forward guys…Keep up the good work