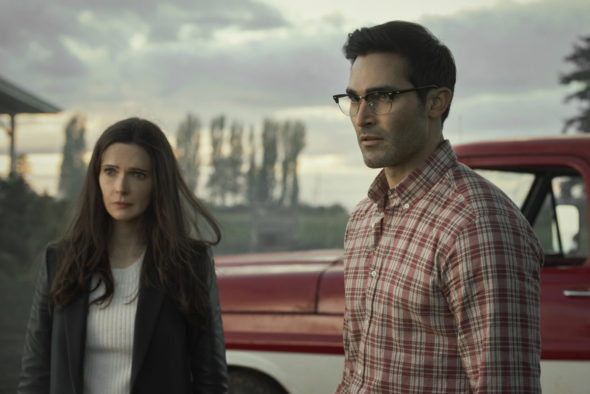 That was super-fast. It’s been announced that the Man of Steel and his family will return for the 2021-22 television season. The CW has renewed the Superman & Lois TV show for a second year after just one airing.

A superhero series based on DC Comics characters created by Jerry Siegel and Joe Shuster, the Superman & Lois TV show stars Tyler Hoechlin, Elizabeth Tulloch, Jordan Elsass, Alexander Garfin, Erik Valdez, Inde Navarrette, Wolé Parks, Adam Rayner, Dylan Walsh, and Emmanuelle Chriqui. After years of facing maniacal supervillains, monsters, and alien invaders, the world’s most famous superhero, Superman aka Clark Kent (Hoechlin), and his award-winning journalist wife, Lois Lane (Tulloch), have gotten married and are now working parents, raising two teen boys. In addition to the usual trials and tribulations of being parents, Clark and Lois must also concern themselves with whether or not their sons Jonathan (Elsass) and Jordan (Garfin) could inherit their father’s Kryptonian superpowers as they grow older. Returning to Clark’s hometown of Smallville to handle some Kent family business, Clark and Lois are reacquainted with Lana Lang (Chriqui), Clark’s first love, and her Fire Chief husband, Kyle Cushing (Valdez). The adults aren’t the only ones rediscovering old friendships in Smallville as the Kent sons are reacquainted with Lana and Kyle’s rebellious daughter, Sarah (Navarrette). Of course, there’s never a dull moment in the life of a superhero, especially with Lois’ father, General Samuel Lane (Walsh), looking for Superman to vanquish a villain or save the day at a moment’s notice.

After just one extended episode, the first season of Superman & Lois averages a 0.37 rating in the 18-49 demographic and 1.75 million viewers. It’s one of the top-rated CW series of the season.

“The phenomenal multiplatform debut of SUPERMAN & LOIS, which delivered for us in a big way on both a linear and streaming basis, is a testament to the creativity, hard work and dedication of the talented people who worked tirelessly in front of and behind the camera, especially in this challenging environment,” said Pedowitz. “We are thrilled to now have two brand-new bonafide hits in SUPERMAN & LOIS and WALKER, both of which have been renewed for next season along with 11 other of our shows, further positioning us for continued strength and stability for next season.”

The super-sized 90-minute series premiere of SUPERMAN & LOIS lifted The CW to its best night of primetime in over two years (since 01/29/19). Additionally, the debut of SUPERMAN & LOIS delivered the largest day-one streaming audience for a new series in the history of The CW.

The audience for SUPERMAN & LOIS soared higher as delayed viewing was factored in, gaining an additional million viewers (1.7million viewers to 2.7million viewers) on a Live+3 basis, while nearly doubling the live-plus same-day viewership among adults 18-34, growing 93% on an L+3 basis.

SUPERMAN & LOIS joins the previously announced 12 current series ordered for the 2021-2022 season including a second season of WALKER, which recently scored The CW’s most watched series premiere in 5 years, as well as ALL AMERICAN (Season 4), BATWOMAN (Season 3), CHARMED (Season 4), DC’S LEGENDS OF TOMORROW (Season 7), DYNASTY (Season 5), THE FLASH (Season 8), IN THE DARK (Season 4), LEGACIES (Season 4), NANCY DREW (Season 3), RIVERDALE (Season 6) and ROSWELL, NEW MEXICO (Season 4). Specific premiere dates for each series will be announced at a later time.

Based on the characters from DC created by Jerry Siegel and Joe Shuster, SUPERMAN & LOIS is developed by Greg Berlanti and Todd Helbing, who serve as executive producers of the series with Sarah Schechter and Geoff Johns. Todd Helbing wrote the teleplay for the first episode, based on a story by Greg Berlanti and Todd Helbing. Lee Toland Krieger executive produced and directed the first episode. SUPERMAN & LOIS is from Berlanti Productions in association with Warner Bros. Television.

Like all of The CW’s upcoming new shows, every episode of SUPERMAN & LOIS and WALKER, as well as the current seasons of BATWOMAN, NANCY DREW and DC’s STARGIRL, will be available to stream on The CW’s free digital platforms (The CW app and CWTV.com) following its broadcast on The CW Network.

What do you think? Do you enjoy the Superman & Lois TV show? Are you glad that The CW has renewed the series for a second season?

I love Superman and Lois series please renew. I feel empty without knowing how to handle difficult situations. Love the family life on Snellville Kent Farm

Thank you, grew up watching George Reeves as Superman. This Superman & Lois has great actors/actresses, plot/story and action! So grateful for a season 2! Hope it runs on for more seasons to come! 🙂