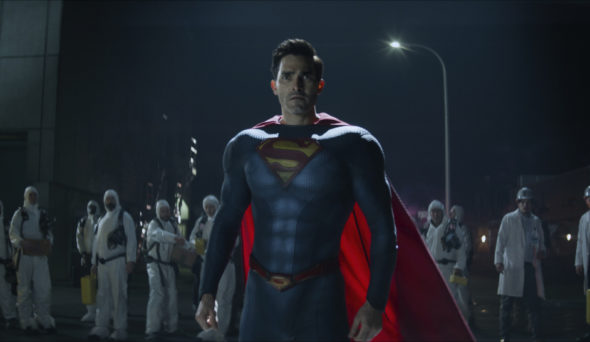 Can you go home again? Has the Superman & Lois TV show been cancelled or renewed for a second season on The CW? The television vulture is watching all the latest cancellation and renewal news, so this page is the place to track the status of Superman & Lois, season two. Bookmark it, or subscribe for the latest updates. Remember, the television vulture is watching your shows. Are you?

Airing on The CW television network, the Superman & Lois TV show stars Tyler Hoechlin, Elizabeth Tulloch, Jordan Elsass, Alexander Garfin, Erik Valdez, Inde Navarrette, Wolé Parks, Adam Rayner, Dylan Walsh, and Emmanuelle Chriqui. After years of facing maniacal supervillains, monsters, and alien invaders, the world’s most famous superhero, Superman aka Clark Kent (Hoechlin), and his award-winning journalist wife, Lois Lane (Tulloch), have gotten married and are now working parents, raising two teen boys. In addition to the usual trials and tribulations of being parents, Clark and Lois must also concern themselves with whether or not their sons Jonathan (Elsass) and Jordan (Garfin) could inherit their father’s Kryptonian superpowers as they grow older. Returning to Clark’s hometown of Smallville to handle some Kent family business, Clark and Lois are reacquainted with Lana Lang (Chriqui), Clark’s first love, and her Fire Chief husband, Kyle Cushing (Valdez). The adults aren’t the only ones rediscovering old friendships in Smallville as the Kent sons are reacquainted with Lana and Kyle’s rebellious daughter, Sarah (Navarrette). Of course, there’s never a dull moment in the life of a superhero, especially with Lois’ father, General Samuel Lane (Walsh), looking for Superman to vanquish a villain or save the day at a moment’s notice.

The first season of Superman & Lois averaged a 0.20 rating in the 18-49 demographic and 990,000 viewers. Find out how Superman & Lois stacks up against other CW TV shows.

Will The CW cancel or renew Superman & Lois for season two? Superhero shows have been very successful for the smallest network and this series is built around one of the originals. Plus, The CW is already saying goodbye to the Black Lightning and Supergirl shows this season so, I have no doubt that Superman & Lois will be renewed. I’ll update this page with breaking developments. Subscribe for free alerts on Superman & Lois cancellation or renewal news.

3/3/21 update: Superman & Lois has been renewed for a second season.

What do you think? Are you glad that the Superman & Lois TV show has been renewed for a second season? How would you feel if The CW had cancelled this TV series, instead?

I look forward to each episode!

Can’t wait for season 2 of this fantastic show. Hopefully they maintain what kept season one great.

Superman and Lois!!! Oh my goodness don’t you dare cancel this show. You’ve taken what could have been a ho hum cheezy series and made it spectacular! The family, the son with partial powers with everyday challenges… the acting stellar the writing absolutely brilliant. This is one of the most refreshing series of this type on television. Thank you for taking a chance on it. It’s worth it!

i hope there will be a second season of superman and more season after that and crossovers..