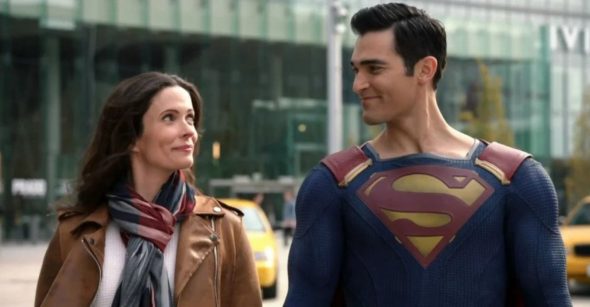 The Man of Steel and his family will have a couple of extra adventures this season. The CW has ordered three additional episodes ahead of the new Superman & Lois TV series’ February 23rd premiere date. This brings the show’s first season tally to 15 episodes.

The show picks up after Superman/Clark Kent (Hoechlin) and Lois Lane (Tulloch) have spent years working in Metropolis at The Daily Planet newspaper. They’ve gotten married and are now working parents, raising two boys. In addition to the usual trials and tribulations of being parents, Clark and Lois must also concern themselves with whether or not their sons Jonathan (Elsass) and Jordan (Garfin) could inherit their father’s Kryptonian superpowers as they grow older. Returning to Smallville to handle some Kent family business, Clark and Lois are reacquainted with Lana Lang (Chriqui), a local loan officer who also happens to be Clark’s first love, and her Fire Chief husband Kyle Cushing (Valdez).

The adults aren’t the only ones rediscovering old friendships in Smallville as the Kent sons are reacquainted with Lana and Kyle’s rebellious daughter, Sarah (Navarrette). Of course, there’s never a dull moment in the life of a superhero, especially with Lois’ father, General Samuel Lane (Walsh) looking for Superman to vanquish a villain or save the day at a moment’s notice. Meanwhile, Superman and Lois’ return to idyllic Smallville is set to be upended when a mysterious stranger (Parks) enters their lives.

The series launches on Tuesday, February 23rd, with a special 90-minute episode. It will be followed by a half-hour special, Superman & Lois: Legacy of Hope, with sneak peeks and interviews from the cast of the new series, plus special guests discussing the legacy of the Man of Steel. The Flash will return for its seventh season premiere a week later.

“Though we’re just a few weeks into the new season, we wanted to get a strategic head start on next season with these early renewals, which allows our production teams to start laying out story arcs and hiring staff, and at the same time, continues to provide us with a strong, stable schedule to build on for next season,” said Mark Pedowitz, Chairman and CEO of The CW Network.

What do you think? Are you looking forward to the upcoming premiere of the Superman & Lois TV show? Do you think that the series will be renewed for a second season?

So far the first three Episodes of superman and Lois Season 2 have been very exciting to watch..all have been fantastic story line’s and with Story’s that are like that..this series well go for a long time..Keep up the good writing,I loved all the show’s so far and look forward to seeing many many more and if you create good story line’s like you have so far..many more Viewer’s will watch and follow.take care