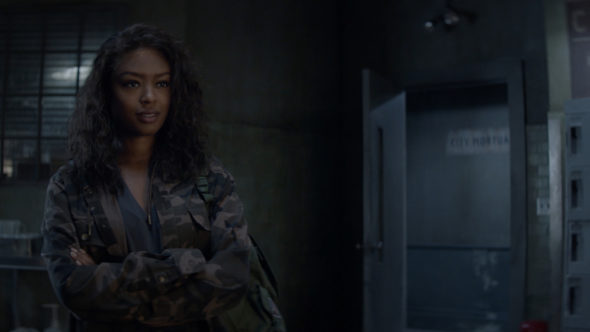 Fans of the Arrowverse on The CW will not be seeing a big crossover event this season. The network originally planned a crossover between Batwoman and Superman & Lois, with possible appearances by characters from Black Lightning or Supergirl, but that will not be happening – another victim of the pandemic.

Caroline Dries, the showrunner behind Batwoman, said the following about the cancelled plans, per TV Line:

“We’re not really able to cross over because physically, we can’t cross crews due to the fear of exposure to COVID. So if Supergirl weren’t ending this year, I would say there would be more of a possibility. But I’m afraid that at least this year, we’re not going to be able to tap into that dynamic.”

Javicia Leslie, the new woman behind the cowl on Batwoman, was also looking forward to a possible crossover. She said the following:

“I’m so heartbroken about the COVID situation because I know that it’s Black Lightning‘s last season, and I would have loved to do a crossover with them. Nafessa [Williams] and Jordan [Calloway] are really good friends of mine, and it would have been great to play with them and be superheroes all on the same show. That would have been epic.”

Superman & Lois (season one) and Black Lightning (season four) will premiere on February 23rd and February 8th, respectively. Batwoman premiered its second season on Sunday night on The CW. The sixth season of Supergirl has not been scheduled yet.

What do you think? Are you sad that there will not be an Arrowverse crossover on The CW this season?

I don’t know if Batwoman will finish its own season with the cliff drop off of viewers. It doesn’t have the viewership to justify it being broadcast on television. They should cut their losses on the show and stick the remaining episodes on HBO Max and be done with it.

By that logic, they’ll be canceling Riverdale and Nancy Drew first. Not to mention some other CW shows that haven’t premiered yet. Don’t worry. It’s not going to happen.

Nobody cares anymore. The Arrowverse was great…and then Supergirl came in with all that girl power feminism nonsense. The verse was redeemed with the Legends…but there was even an episode where they basically said oh the crossover event is happening, we don’t care. Glorious. Arrow was around way longer than it needed to be, Flash became lackluster, and in an attempt to return to Supergirl, I learned it was even worse than before. Arrowverse is dead.

Thank you yep it lackluster it sure is enough already with this shows tired same topics on the CW channel so awful aspect for the flash, Arrow, stargirl love way better shows too much nowadays.

There’s nothing wrong with empowering women.

You’re right, there’s nothing wrong with it…but I don’t look to escape the reality around me to have it shoved down my throat every three seconds.

look forward dc comics not same anymore on the cw channel love it so good.