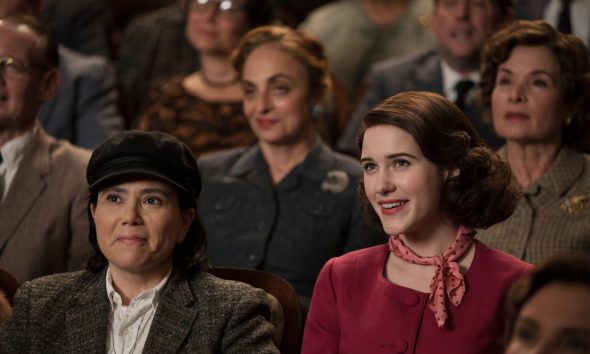 The Marvelous Mrs. Maisel is getting ready for its fourth season, which means production has now resumed on the Amazon Prime Video series. Filming was originally set to restart in New York during the summer months, but that did not happen due to the pandemic.

The series follows Miriam “Midge” Maisel, a 1950s housewife who becomes a stand-up comedian. Star Rachel Brosnahan shared a photo from the set of The Marvelous Mrs. Maisel on her Instagram account.

The pandemic will still have an impact on the series. Deadline revealed the following about filming of season four of the Amazon series:

“Series creator/executive producer Amy Sherman Palladino and executive producer Daniel Palladino have previously said that they will rely less on extras in Season 4 for safety reasons amid the pandemic and lean more on CGI to retain the rich visual feel of the show, known for employing hundreds of background performers in some scenes.”

A January premiere was originally planned for the fourth season but that obviously isn’t happening.  A new target date has not yet been set.

What do you think? Are you excited for the return of The Marvelous Mrs. Maisel TV show on Amazon?

Why would any business cancel a proven successful program. It’s not good business and no way to treat subscribers to Amazon Prime. This is a deal killer for this consumer.

Thank goodness! Maybe they’ll use the song I wrote on the show!

Can’t wait. I love this show.

Wait until this fall coming back on I believe. Start film this summer is what they are saying.

Yesss! I can hardly wait!

I can’t wait to see this show love it look forward every episode hooked during coronavirus pandemic watch all of them. Please premiere it soon so funny .