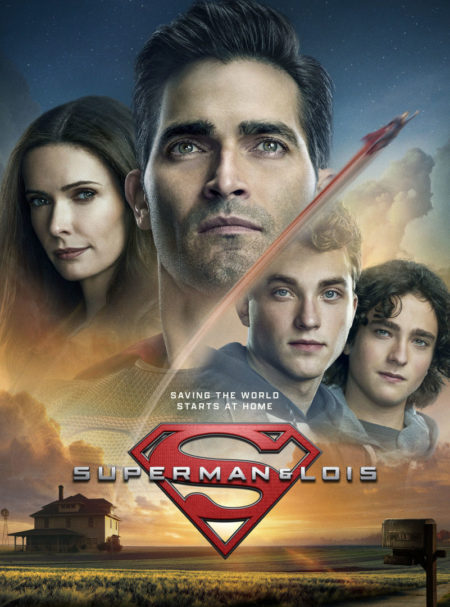 TV show description:
A superhero series based on DC Comics characters created by Jerry Siegel and Joe Shuster, the Superman & Lois TV series revolves around the Man of Steel, his wife, and their two sons when they leave the big city for small-town life.

After years of facing maniacal supervillains, monsters, and alien invaders, the world’s most famous superhero, Superman aka Clark Kent (Hoechlin), and his award-winning journalist wife, Lois Lane (Tulloch), come face to face with one of their greatest challenges — dealing with all of the stress, pressures, and complexities that come with being working parents.

The show picks up after Clark and Lois have built successful careers working in Metropolis at The Daily Planet newspaper. They’ve gotten married and are now working parents, raising two teen boys. In addition to the usual trials and tribulations of being parents, Clark and Lois must also concern themselves with whether or not their sons Jonathan (Elsass) and Jordan (Garfin) could inherit their father’s Kryptonian superpowers as they grow older.

Returning to Clark’s hometown of Smallville to handle some Kent family business, Clark and Lois are reacquainted with Lana Lang (Chriqui), a local loan officer who also happens to be Clark’s first love, and her Fire Chief husband, Kyle Cushing (Valdez).

The adults aren’t the only ones rediscovering old friendships in Smallville as the Kent sons are reacquainted with Lana and Kyle’s rebellious daughter, Sarah (Navarrette). Of course, there’s never a dull moment in the life of a superhero, especially with Lois’ father, General Samuel Lane (Walsh), looking for Superman to vanquish a villain or save the day at a moment’s notice.

Meanwhile, Superman and Lois’ return to idyllic Smallville is set to be upended when a mysterious stranger (Parks) and an impassioned self-made mogul, Morgan Edge (Rayner), enter their lives.

What do you think? Do you like the Superman & Lois TV show? Do you think it should be cancelled or renewed for another season?

I totally agree Liliane. The show is a refreshing take on the superman saga. I mean “what if?” It’s a story about an all-powerful alien trying his best to help Humanity knowing that our world would show case him on every news cast, talk show and magazine in the world. Even though he is Kryptonian he still by nature feels and wants as humans do. So it doesn’t take too much of a stretch of imagination to see him seduced by the idolatry of our world. It’s not all about how logically it all fits together (although writers are doing… Read more »

I have to give this up. There are too many super beings and it’s like the Harry Potter stories where there is a magic stunt every 10 seconds.
Also what is it with the Beard on Clark and oh yes, Superman. Can’t anyone see they are the same person? Get rid of the beard. Still going to give it up until the stores become less crowded with super beings.

Little too much_ this is us for me

I hope this series gets renewed. I like this series because it shows the human side of Superman/Clark Kent with his family drama with two teenagers and Lois as his wife (finally!). It’s corny sometimes, but still it’s not boring. I’m old enough to remember the first tv series with George Reeves.
After all this time, we still can’t figure out why no one recognizes Clark and Superman vice versa. It’s just a pair of glasses.