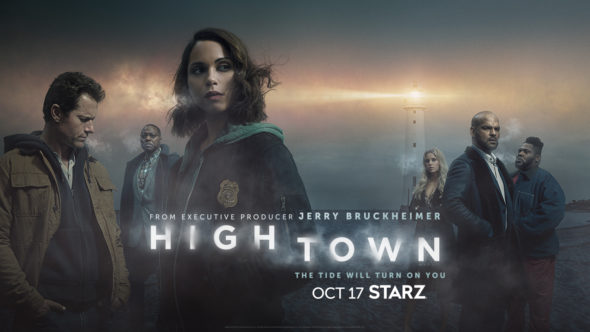 In its first season, Hightown drew very low ratings — until the final two episodes of the season. That surge suggests that many viewers were watching much of the series via some kind of delayed viewing and that bump in the ratings may have helped the Starz show secure a second renewal. Will history repeat itself? Will Hightown be cancelled or renewed for season three? Stay tuned.  *Status Update Below.

A crime drama series, the Hightown TV show stars Monica Raymund, James Badge Dale, Riley Voelkel, Amaury Nolasco, Atkins Estimond, and Dohn Norwood. Tonya Glanz and Imani Lewis recur while second season guests include Luis Guzmán, Jona Xiao, Carlos Gómez, Mark Boone Junior, Cecil Blutcher, and Crystal Lee Brown. In the second season, Jackie Quinones (Raymund) has achieved her dream of becoming a real cop and is out to do some good in this world. Thrust immediately into the crime wave of deadly carfentanyl flooding Cape Cod, Jackie is laser-focused on bringing down drug dealer Frankie Cuevas (Nolasco), the man she holds responsible for the death of her best friend, Junior. When Frankie’s cousin Jorge (Guzmán) joins his operation, he introduces a new level of violence and chaos. With disgraced officer Ray Abruzzo (Dale) off the force and mired in depression, Jackie finds a new partner in Leslie (Glanz), the only other female on the force. Through it all, Jackie must walk the tightrope of sobriety as she struggles to stay above an ocean of secrets, betrayal and the shame and failure of her past.

For comparisons: Season one of Hightown on Starz averaged a 0.03 rating in the 18-49 demographic and 236,000 viewers in the live+same day ratings.

What do you think? Do you like the Hightown TV series on Starz? Should it be cancelled or renewed for a third season?

I love this show! Great characters, Great story line, and every episode keeps you wanting More!!

I love this show and I can’t wait to see what happens next. I hope it gets renewed and I give it a 10 out of 10 rating.

I love this show. There is too much that needs to be explained. Please give it a 3rd season. This is a word of mouth series. People are starting to love it. Jerry needs to do more publicity for this show. This is a 10 out of 10.

Should be renewed for a third season.

Love this show must renew programming