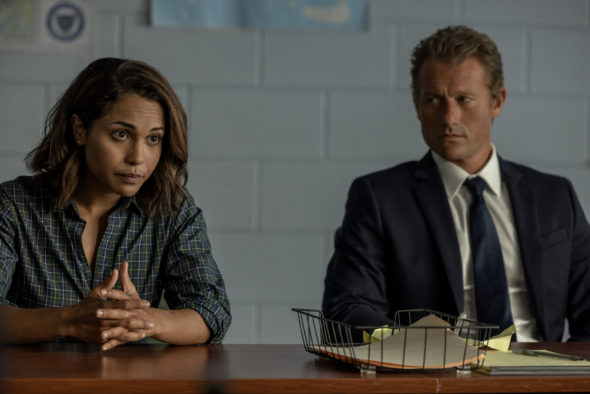 Is Jackie in over her head? Has the Hightown TV show been cancelled or renewed for a third season on Starz? The television vulture is watching all the latest cancellation and renewal news, so this page is the place to track the status of Hightown, season three. Bookmark it, or subscribe for the latest updates. Remember, the television vulture is watching your shows. Are you?

Airing on the Starz cable channel, the Hightown TV show stars Monica Raymund, James Badge Dale, Riley Voelkel, Amaury Nolasco, Atkins Estimond, and Dohn Norwood. Tonya Glanz and Imani Lewis recur while second season guests include Luis Guzmán, Jona Xiao, Carlos Gómez, Mark Boone Junior, Cecil Blutcher, and Crystal Lee Brown. In the second season, Jackie Quinones (Raymund) has achieved her dream of becoming a real cop and is out to do some good in this world. Thrust immediately into the crime wave of deadly carfentanyl flooding Cape Cod, Jackie is laser-focused on bringing down drug dealer Frankie Cuevas (Nolasco), the man she holds responsible for the death of her best friend, Junior. When Frankie’s cousin Jorge (Guzmán) joins his operation, he introduces a new level of violence and chaos. With disgraced officer Ray Abruzzo (Dale) off the force and mired in depression, Jackie finds a new partner in Leslie (Glanz), the only other female on the force. Through it all, Jackie must walk the tightrope of sobriety as she struggles to stay above an ocean of secrets, betrayal, and the shame and failure of her past.

The second season of Hightown averaged a 0.04 rating in the 18-49 demographic and 205,000 viewers in the live+same day ratings (includes all DVR playback through 3:00 AM). Compared to season one, that’s up by 23% in the demo and down by 13% in viewership in the live+same day ratings (including DVR playback through 3:00 AM). While these numbers don’t include further delayed or streaming viewing, they are a very good indicator of how a show is performing, especially when compared to others on the same channel. Though other economic factors are involved, the higher-rated shows usually get renewed and the lower-rated ones get cancelled. Find out how Hightown stacks up against other Starz TV shows.

Will Starz cancel or renew Hightown for season three? This show didn’t draw big traditional ratings in its early first season episodes but the numbers saw a big jump in the final two weeks. That suggests that a lot of people were watching via delayed viewing and that likely helped the series get renewed for season two. I’m thinking something like that might happen again and help this show land a third season renewal. I’ll update this page with breaking developments. Subscribe for free alerts on Hightown cancellation or renewal news.

3/2/2022 update: Hightown has been renewed for a third season on Starz.

What do you think? Are you glad that the Hightown TV show has been renewed for a third season? How would you feel if Starz had cancelled this TV series, instead?

Yes it should be renewed. Great show. Monica Raymund from Chicago Fire is such a good actress

Really, really enjoying this show- the characters are developing in season 2 and as a viewer I’m becoming more invested in how things turn out for both Jackie and Renee especially. Would be sooo disappointed if this wasn’t renewed. I didn’t see a lot of advertising of this show and suspect the low viewing numbers more to do with ppl not being aware it even exists. Well worth a watch!

This was Brilliant cant wait for season 3,Just finished season 2 and best ive seen in a long while.