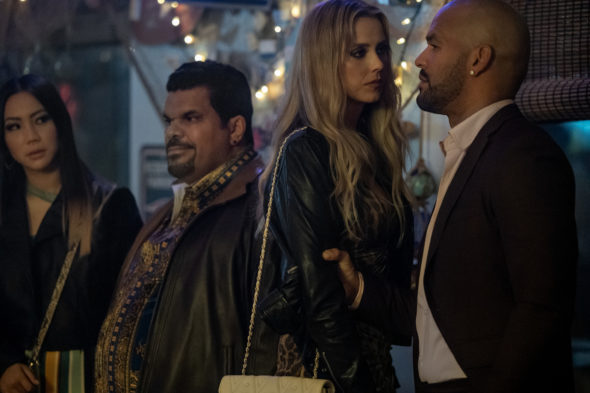 Can Jackie keep it together in the second season of the Hightown TV show on Starz? As we all know, the Nielsen ratings typically play a big role in determining whether a TV show like Hightown is cancelled or renewed for season three. Unfortunately, most of us do not live in Nielsen households. Because many viewers feel frustrated when their viewing habits and opinions aren’t considered, we invite you to rate all of the second season episodes of Hightown here.  *Status Update Below.

A Starz crime drama series, the Hightown TV show stars Monica Raymund, James Badge Dale, Riley Voelkel, Amaury Nolasco, Atkins Estimond, and Dohn Norwood. Tonya Glanz and Imani Lewis recur while second season guests include Luis Guzmán, Jona Xiao, Carlos Gómez, Mark Boone Junior, Cecil Blutcher, and Crystal Lee Brown. In the second season, Jackie Quinones (Raymund) has achieved her dream of becoming a real cop and is out to do some good in this world. Thrust immediately into the crime wave of deadly carfentanyl flooding Cape Cod, Jackie is laser-focused on bringing down drug dealer Frankie Cuevas (Nolasco), the man she holds responsible for the death of her best friend, Junior. When Frankie’s cousin Jorge (Guzmán) joins his operation, he introduces a new level of violence and chaos. With disgraced officer Ray Abruzzo (Dale) off the force and mired in depression, Jackie finds a new partner in Leslie (Glanz), the only other female on the force. Through it all, Jackie must walk the tightrope of sobriety as she struggles to stay above an ocean of secrets, betrayal and the shame and failure of her past.

What do you think? Which season two episodes of the Hightown TV series do you rate as wonderful, terrible, or somewhere between? Do you think that Hightown should be cancelled or renewed for a third season on Starz? Don’t forget to vote, and share your thoughts, below.

Love this series! Please bring it back! Team season 3!!

Season 3 needs to happen this is a show to watch for sure!!!

It would be very disrespectful to not have a season 3!!! #teamhightown

Such a great show. People need to know about it. Dot, dot, dot was one of the best episodes of any show all year. There better be a season 3. S2 is even better than 1.

Come on Starz! We want a Season 3.

Hightown is one of those series I would refer to as a hidden gem. Meaning it’s a high-quality show that continues to bring its audience back each week begging for more, yet it remains unfamiliar and undiscovered by many other viewers. If you bring up the series Hightown while discussing must-watch television with a friend, likely, they have never heard of the show. I believe Hightown has already proved its worthiness as a television show. If the second half of season two goes as well as the first half has, then the series deserves a third and fourth season renewal… Read more »