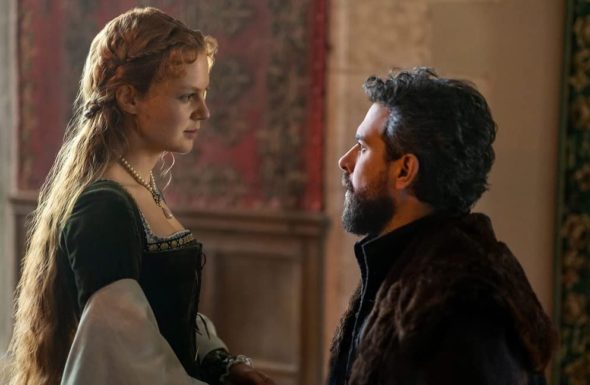 We know the story’s ending but will there be any surprises along the way? Has the Becoming Elizabeth TV show been cancelled or renewed for a second season on Starz? The television vulture is watching all the latest cancellation and renewal news, so this page is the place to track the status of Becoming Elizabeth, season two. Bookmark it, or subscribe for the latest updates. Remember, the television vulture is watching your shows. Are you?

Airing on the Starz cable channel, the Becoming Elizabeth TV show stars Alicia von Rittberg, Oliver Zetterström, Romola Garai, Jessica Raine, Tom Cullen, John Heffernan, Jamie Blackley, Alexandra Gilbreath, Jamie Parker, Leo Bill, Bella Ramsey, Ekow Quartey, Alex Macqueen, and Olivier Huband. The story revolves around the younger years of Elizabeth Tudor (Rittberg), long before she ascended the English throne and became Queen Elizabeth I. An orphaned teenager, she became embroiled in the political and sexual politics of the English court. The death of King Henry VIII sees his nine-year-old son Edward (Zetterström), take the throne and sets into motion a dangerous scramble for power when Elizabeth, Edward, and their sister Mary (Garai), find themselves pawns in a game between the great families of England and the powers of Europe who vie for control of the country.

The first season of Becoming Elizabeth averages a 0.02 rating in the 18-49 demographic and 157,000 viewers in the live+same day ratings (including DVR playback through 3:00 AM). While these numbers don’t include further delayed or streaming viewing, they are a very good indicator of how a show is performing, especially when compared to others on the same channel. There can be other economic factors involved in a show’s fate, but typically the higher-rated series are renewed and the lower-rated ones are cancelled. Find out how Becoming Elizabeth stacks up against other Starz TV shows.

Will Starz cancel or renew Becoming Elizabeth for season two? The cable channel has aired numerous historical dramas in the past and they typically wrap up in one season. This show hasn’t been promoted as a one-and-done limited series so, I suspect there’s a good chance that there will be more story to tell in a second season. I’ll update this page with breaking developments. Subscribe for free alerts on Becoming Elizabeth cancellation or renewal news.

What do you think? Do you hope that the Becoming Elizabeth TV show will be renewed for a second season? How would you feel if Starz cancelled this TV series, instead?