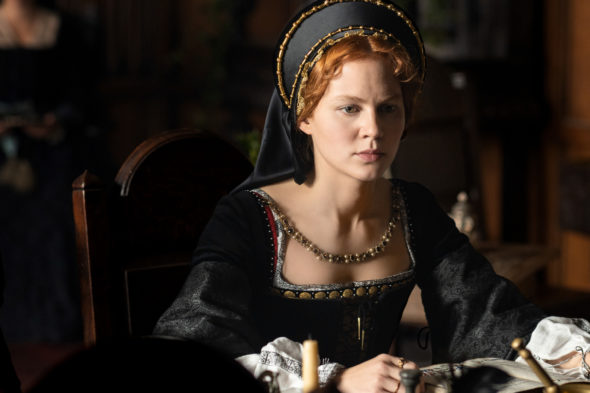 The early days of Queen Elizabeth I won’t continue to unfold on Starz. The cable channel has cancelled Becoming Elizabeth, so we won’t be seeing a second season. The first season of eight episodes finished airing in early August.

A historical drama series, the Becoming Elizabeth TV show stars Alicia von Rittberg, Oliver Zetterström, Romola Garai, Jessica Raine, Tom Cullen, John Heffernan, Jamie Blackley, Alexandra Gilbreath, Jamie Parker, Leo Bill, Bella Ramsey, Ekow Quartey, Alex Macqueen, and Olivier Huband. The story revolves around the younger years of Elizabeth Tudor (Rittberg), long before she ascended the of England throne and became Queen Elizabeth I. An orphaned teenager, she became embroiled in the political and sexual politics of the English court. The death of King Henry VIII sees his nine-year-old son Edward (Zetterström), take the throne and sets into motion a dangerous scramble for power when Elizabeth, Edward, and their sister Mary (Garai), find themselves pawns in a game between the great families of England and the powers of Europe who vie for control of the country.

Airing on Sunday nights, the first season of Becoming Elizabeth averaged a 0.01 rating in the 18-49 demographic and 136,000 viewers in the live+same day ratings (including DVR playback through 3:00 AM). While these numbers don’t include further delayed or streaming viewing, they are a very good indicator of how a show is performing, especially when compared to others on the same channel. There can be other economic factors involved in a show’s fate, but typically the higher-rated series are renewed and the lower-rated ones are cancelled. Becoming Elizabeth was one of the lowest-rated scripted series on Starz in the overnights.

The show was created and written by Anya Reiss. She broke the news of the show’s cancellation by Starz via Twitter.

Starz to us. I'm afraid. pic.twitter.com/YGrKMZWd1Z

What do you think? Did you follow the Becoming Elizabeth TV series on Starz? Are you sorry to hear that this drama won’t be getting a second season?

This was one of the few shows I looked forward to watching.
You polled the wrong people in your ratings survey.
I am sorely disappointed.
Boo-Hiss, Starz.

I am crushed to find out that there will be no season 2 for becoming Elizabeth. Nobody asked me and it was the only reason I was paying for Starz.

SOOO STUPID and sooo incredibly disapointed. they barely promoted the show and expected it to do well? it was one of the most WELL made historical political drama ive ever seen. and certainly the best show covering the Tudors. Already watched it twice 🙁 im so sad

‘Becoming Elizabeth’ was the best tv series I had watched in years. I couldn’t recommend it highly enough to others. The writing, the acting, the production in general was beyond top notch. I’m shocked to learn it is not to be renewed. Shocked and extremely disappointed.

Thoroughly enjoyed the first season. I was really looking forward to season 2. I will be notifying Starz that I will be canceling my service. Thank you for the opportunity to share my thoughts.

Do not cancel it please

Two shows now they have cancelled that I watch….sad.

I just got into this show. Loved the history and thought this was well written. Not happy this is being cancelled

Please- this show was a rival to my favorite show ever, Game of Thrones. It was well written. I loved the actors. The history behind it is incredibly interesting. I even loved the music. Give it time to catch on. Its literally the only reason i signed up for stars