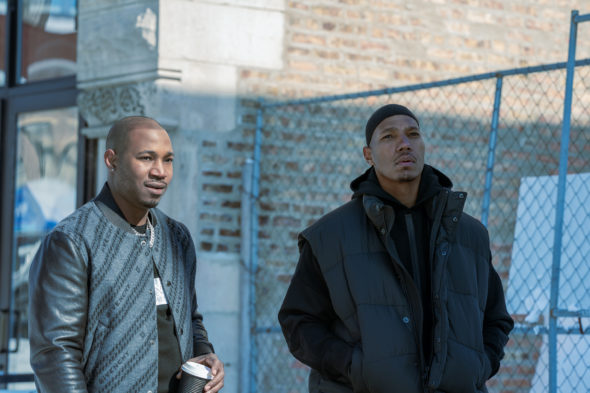 Is Tommy in over his head or, right in his element? Has the Power Book IV: Force TV show been cancelled or renewed for a second season on Starz? The television vulture is watching all the latest cancellation and renewal news, so this page is the place to track the status of Power Book IV: Force, season two. Bookmark it, or subscribe for the latest updates. Remember, the television vulture is watching your shows. Are you?

Airing on the Starz cable channel, the Power Book IV: Force TV show is a sequel and spin-off to the Power series. It stars Joseph Sikora, Isaac Keys, Lili Simmons, Gabrielle Ryan, Shane Harper, Kris D. Lofton, Anthony Fleming III, Lucien Cambric, and Tommy Flanagan. The story centers around criminal Tommy Egan (Sikora) after he’s put the wreckage of his life in New York behind him. Tommy makes a quick detour in Chicago to close an old wound that’s been haunting him for decades. However, what was supposed to be a quick stop turns into a labyrinth of family secrets and lies that he thought were long buried. One step leads to another and Tommy quickly finds himself in Chicago’s drug game, inserting himself between the city’s two biggest crews. In a city divided by race, Tommy straddles the line, ultimately becoming the lynchpin that not only unites them but holds the power to watch them crumble. In the first season, Tommy uses his outsider status to his advantage, breaking all the local rules and rewriting them on his quest to become the biggest drug dealer Chicago has ever seen.

The first season of Power Book IV: Force averaged a 0.13 rating in the 18-49 demographic and 466,000 viewers in the live+same day ratings (including DVR playback through 3:00 AM). While these numbers don’t include further delayed or streaming viewing, they are a very good indicator of how a show is performing, especially when compared to others on the same channel. There can be other economic factors involved in a show’s fate, but typically the higher-rated series are renewed and the lower-rated ones are cancelled. Find out how Power Book IV: Force stacks up against other Starz TV shows.

Will Starz cancel or renew Power Book IV: Force for season two? The Power series and its spin-offs have been very successful for Starz and, though this one may not be the highest-rated of the franchise, it’s still doing well enough to be renewed. I’ll update this page with breaking developments. Subscribe for free alerts on Power Book IV: Force cancellation or renewal news.

3/10/22 update: Power Book IV: Force has been renewed for a second season on Starz.

What do you think? Are you glad that the Power Book IV: Force TV show has been renewed for a second season? How would you feel if Starz had cancelled this TV series, instead?

Power Book Force was perfect, love the characters, glad you were able to pick him up from Power. Bring it on this season please !!