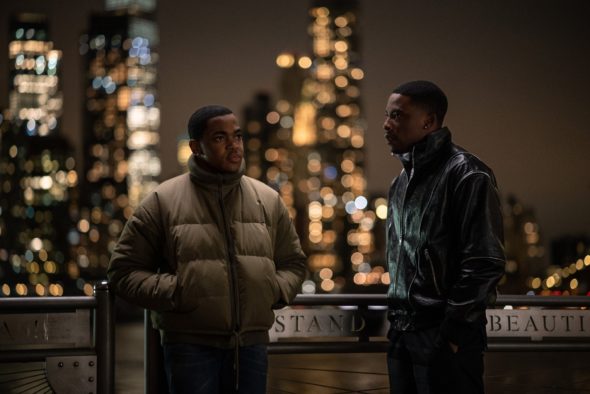 Can Tariq escape his past? Has the Power Book II: Ghost TV show been cancelled or renewed for a third season on Starz? The television vulture is watching all the latest cancellation and renewal news, so this page is the place to track the status of Power Book II: Ghost, season three. Bookmark it, or subscribe for the latest updates. Remember, the television vulture is watching your shows. Are you?

Airing on the Starz cable channel, Power Book II: Ghost stars Michael Rainey Jr., Mary J. Blige, Shane Johnson, Gianni Paolo, Daniel Bellomy, Paige Hurd, Cliff “Method Man” Smith, Larenz Tate, Melanie Liburd, Daniel Sunjata, Berto Colon, Woody McClain, Lovell Adams-Gray, LaToya Tonodeo, Alix Lapri, and Paton Ashbrook. A sequel to the Power series, the show begins with Tariq St. Patrick (Rainey Jr.), a freshman at Stansfield University with a bright future ahead of him. He would be the embodiment of his father’s dreams, if not for the double life he’s living. In season two, Tariq is still running from a legacy that haunts him. Forced into the choice to take the life of his professor, Tariq finds himself drifting further from that which he’s been fighting to protect: his family. With his mother Tasha (Naturi Naughton) in witness protection, Tariq knows he must sacrifice anything to save what’s left of his family.

The second season of Power Book II: Ghost averages a 0.15 rating in the 18-49 demographic and 537,000 viewers in the live+same day ratings (includes all DVR playback through 3:00 AM). Compared to season one, that’s down by 15% in the demo and down by 7% in viewership in the live+same day ratings (including DVR playback through 3:00 AM). While these numbers don’t include further delayed or streaming viewing, they are a very good indicator of how a show is performing, especially when compared to others on the same channel. Though other economic factors are involved, the higher-rated shows usually get renewed and the lower-rated ones get cancelled. Find out how Power Book II: Ghost stacks up against other Starz TV shows.

Will Starz cancel or renew Power Book II: Ghost for season three? In its first season, this show was one of the channel’s highest-rated series. It’s part of the successful Power franchise so, I have no doubt that it will be renewed. I’ll update this page with breaking developments. Subscribe for free alerts on Power Book II: Ghost cancellation or renewal news.

What do you think? Are you glad that the Power Book II: Ghost TV show has been renewed for a third season? How would you feel if Starz had cancelled this TV series, instead?