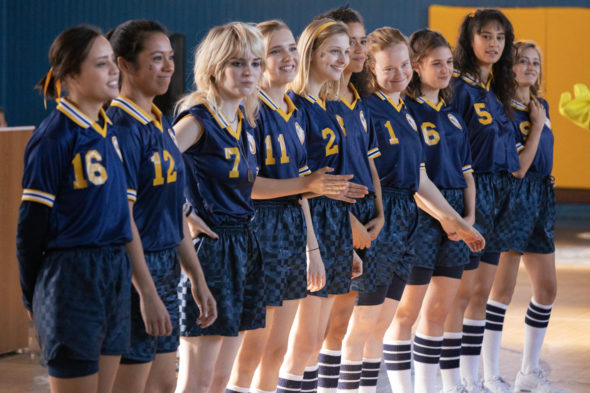 How did these girls survive? Has the Yellowjackets TV show been cancelled or renewed for a second season on Showtime? The television vulture is watching all the latest cancellation and renewal news, so this page is the place to track the status of Yellowjackets, season two. Bookmark it, or subscribe for the latest updates. Remember, the television vulture is watching your shows. Are you?

Airing on the Showtime cable channel, the Yellowjackets TV show stars Melanie Lynskey, Juliette Lewis, Christina Ricci, Tawny Cypress, Ella Purnell, Sammi Hanratty, Sophie Thatcher, Sophie Nélisse, Steven Krueger, and Jasmin Savoy Brown. The story begins with a team of wildly talented high-school girls soccer players who survive a plane crash deep in the Ontario wilderness. The series chronicles their descent from a complicated but thriving team to warring clans that are able to survive for 19 months. The show also picks up 25 years later, tracking the lives the survivors have attempted to piece back together as adults — while revealing the truth about their survival.

The first season of Yellowjackets averaged a 0.05 rating in the 18-49 demographic and 275,000 viewers in the live+same day ratings (including DVR playback through 3:00 AM). While these numbers don’t include further delayed or streaming viewing, they are a very good indicator of how a show is performing, especially when compared to others on the same channel. There can be other economic factors involved in a show’s fate, but typically the higher-rated series are renewed and the lower-rated ones are cancelled. Find out how Yellowjackets stacks up against other Showtime TV shows.

Will Showtime cancel or renew Yellowjackets for season two? Though it seems like this story could be told over the span of one season, there’s been no indication that it’s a close-ended mini-series. The traditional ratings aren’t very good but, for now, I am optimistic that it will be renewed. I’ll update this page with breaking developments. Subscribe for free alerts on Yellowjackets cancellation or renewal news.

12/17/21 update: Yellowjackets has been renewed for a second season on Showtime.

What do you think? Are you glad that the Yellowjackets TV show has been renewed for a second season? How would you feel if Showtime had cancelled this TV series, instead?

It just got renewed for a second season.

I’m not even going to think that there will be any more seasons. It has intriguing, haunting, rabbit hole mysteries, and I’m shocked as to the mere mention this show could only have one season. I hope I’m not alone in this. I think it would be a big mistake.

Please I need to find out what happens. Another season please if not more