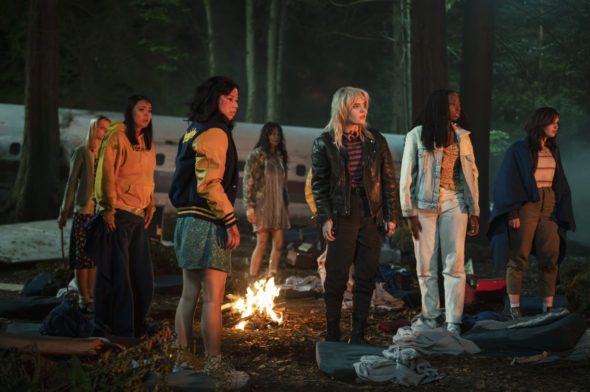 The mysteries will continue to unfold. Yellowjackets has been renewed for a second season on Showtime. The first season wraps on January 16th.

A horror and coming-of-age drama series, the Yellowjackets TV show stars Melanie Lynskey, Juliette Lewis, Christina Ricci, Tawny Cypress, Ella Purnell, Sammi Hanratty, Sophie Thatcher, Sophie Nélisse, Steven Krueger, and Jasmin Savoy Brown. The story begins with a team of wildly talented high-school girls soccer players who survive a plane crash deep in the Ontario wilderness. The series chronicles their descent from a complicated but thriving team to warring clans that are able to survive for 19 months. The show also picks up 25 years later, tracking the lives the survivors have attempted to piece back together as adults — while revealing the truth about their survival.

Airing on Sunday nights, the first season of Yellowjackets averages a 0.03 rating in the 18-49 demographic and 2.15 million viewers in the live+same day ratings (including DVR playback through 3:00 AM). It’s a middle-of-the-road performer in the traditional ratings but, like other pay-for-view channels, Showtime is interested in retaining subscribers, not attracting advertisers.

“YELLOWJACKETS has been an unadulterated sensation for SHOWTIME,” said Levine. “We are overwhelmed by both the acclaim and the audience response to our series, including several ‘Best of 2021’ lists, a 100% score on Rotten Tomatoes and snowballing viewership. Clearly there is a hunger for originality and audacity, and our incredible showrunners Ashley, Bart and Jonathan, along with their pitch-perfect cast, have delivered that and so much more. I can’t wait to see the surprises they have in store for us in season two.”

“We are beyond grateful for the incredible support we’ve received for this show – both from Gary Levine, Jana Winograde, David Nevins, Amy Israel, Dave Binegar, and the rest of the fantastic Showtime team, and from our growing team of “Citizen Detectives” at home,” said Lyle, Nickerson and Lisco. “We can’t wait to continue telling this story with our amazing cast and crew. The saga continues!” Equal parts survival epic, psychological horror story and coming-of-age drama, YELLOWJACKETS is the saga of a team of wildly talented high school girls soccer players who become the (un)lucky survivors of a plane crash deep in the remote northern wilderness. The series chronicles their descent from a complicated but thriving team to savage clans, while also tracking the lives they’ve attempted to piece back together nearly 25 years later, proving that the past is never really past and what began out in the wilderness is far from over. Season one also stars Ella Purnell (Sweetbitter), Samantha Hanratty (SHAMELESS), Sophie Thatcher (Prospect), Jasmin Savoy Brown (The Leftovers), Sophie Nélisse (The Book Thief), Steven Krueger (The Originals) and Warren Kole (Shades of Blue).

What do you think? Have you watched the first season of Yellowjackets on Showtime? Are you glad that it’s been renewed for a second season?