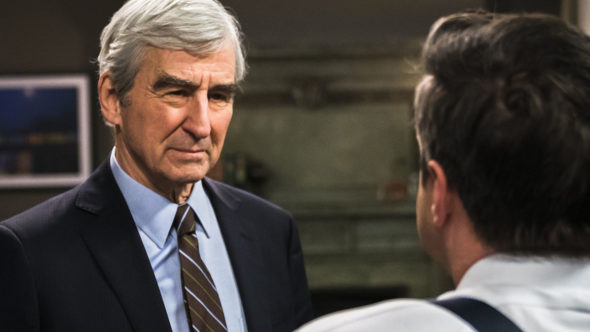 Another familiar face is returning for the revival of Law & Order on NBC. Sam Waterston has signed on to rejoin the series as District Attorney Jack McCoy, a role he played on the original run for 17 seasons.

“Very few casting announcements have ever given me this much pleasure. Since day one, Sam has had perfect pitch when it comes to Jack McCoy as a character who both reflects and expands our ability to understand the law. He is the ultimate conscience of the show and I look forward to him emulating the career of New York District Attorney Robert Morgenthau, who served until he was 90. With both Sam and Anthony (Anderson) returning, it shows that the 21st season is merely a continuation of where we left off.”

Waterston is not the only new addition to the cast. Per Deadline, Odelya Halevi has joined the cast as Assistant District Attorney Samantha Maroun. She joins Jeffrey Donovan, Hugh Dancy, Camryn Manheim, and Anthony Anderson.

What do you think? Are you excited to see Waterston on the revival of Law & Order?

Yes I am excited.!!!Law and Order great tv.

Hell yeah real tv is back

This is the best Christmas present EVER!! A huge welcome back Jack to Sam Waterston. I can’t wait to have the one and only original Law & Order back in my life. I am SOOOOOO happy!! February 24th can’t get here fast enough! I am also excited to see Hugh Dancy listed as a cast member. I hope it’s not just for one episode. In whatever role they put him, he will be a welcome addition. Now all they need to do is bring back Jesse L. Martin as Ed Green. If that happens, I would think I had died… Read more »

Now this is the one I’ve been waiting to hear about. Could not be more thrilled.

Had to call all friends and family–we are SO DELIGHTED that both Sam and Anthony are returning. This will undoubtedly be met with great enthusiasm by established fans and pave the way for similar responses from new ones. So geeked for this!!

Yes!! One of the best & most authentic characters ever! Welcome Back, Jack!