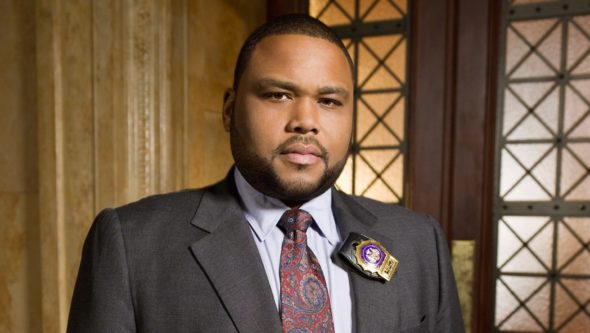 Law & Order has locked in a member of the original cast to return for the NBC revival and added a new face to the series as well. Anthony Anderson — who played Junior Detective Kevin Bernard for the final three seasons of the crime drama’s original run — is returning. Anderson is the first alum of the series to sign on for the Law & Order revival.

Hugh Dancy (Hannibal) is joining him and will play a new character – an assistant district attorney, per Deadline. Jeffrey Donovan, best known for his role on Burn Notice, has previously been cast as an NYPD detective.

What do you think? Are you excited about the return of Law & Order? Did you watch the show’s original run?

Glad to see this show returning. Hope to see more of the original cast. One I want to see back is the guy who worked with the D. A who passed away. I can’t remember his name. But I did notice he was missing at that funeral. The tall black guy. Such an excellent cast.

Have been watching reruns for about 2 yrs. The whole time wishing it would come back. At last it is! Can’t wait and would love to see Sam Waterson back! This has always been my favorite show since the day it started! A whole nite of Law and Order, SVU and Organized Crime will be Perfect! Thanks for bringing it back

The WE network where I live is showing the whole series from Season 1 through Season 20. I have decided to DVR it and watch it as I have forgotten the beginning. I love this show so much. I am so happy it is coming back. I have so much love for this!!!

I’m not feeling this.

I loved Law and Order and will def watch. Hated the Anthony Anderson character.

I have & continue to watch Law & Order reruns because they never get too old. I am thrilled that they are bringing it back. I’m keeping my fingers crossed that Sam Waterston will be coming back with it. No one can take his place!

It is looking less and less likely I will watch. There are so many really terrific people they could bring back, and they brought back the one I didn’t want back. I don’t know if they can pay Sam Waterston enough to come back.

I have watched every Law and Order show and episode. I will definitely watch this one. Can’t wait.

Good, I’m glad to hear it. Next step, get Sam Waterston back as Jack!