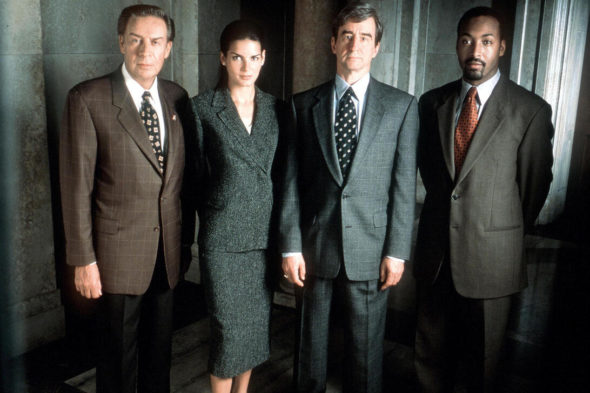 One of the longest-running drama series in TV history is making a comeback. NBC is reviving the original Law & Order TV show for a 21st season. Further details, including casting, will be announced at a later date. Given the success of series creator Dick Wolf’s full night of Chicago shows on NBC and entire evening of FBI shows on CBS, it seems likely that Law & Order will be joining SVU and Organized Crime on Thursdays.

The Law & Order series initially ran on NBC for 456 episodes, between 1990 and 2010, before being cancelled. Wolf tried to find a new home for the show but was ultimately unsuccessful. Many performers came and went during the show’s long run but some of the most notable stars include Steven Hill, Jerry Orbach, S. Epatha Merkerson, Sam Waterston, Jesse L. Martin, Benjamin Bratt, Angie Harmon, Fred Thompson, Jeremy Sisto, Linus Roache, and Anthony Anderson.

· NBC is bringing back one of its most treasured and honored dramas with the 21st season of “Law & Order.” The series, which will continue the classic bifurcated format that was created for its original run, will once again examine “the police who investigate crime and the district attorneys who prosecute the offenders.”

· “There are very few things in life that are literally dreams come true,” said creator and executive producer Dick Wolf. “This is mine.”

· “‘Law & Order’ is quite simply one of the most iconic shows in television history, and the idea of continuing its legacy and partnering with Dick on an all-new season is nothing short of exhilarating” said Susan Rovner, Chairman, Entertainment Content, NBCUniversal Television and Streaming, “This is great news for NBC as well as TV fans everywhere.”

· The series was nominated for more than 50 Emmy Awards and won in 1997 for Outstanding Drama Series.

· A premiere date and cast will be announced at a later date.

· The series will be produced by Universal Television, a division of Universal Studio Group, in association with Wolf Entertainment.

Check out our NBC status sheet to track the peacock network’s new series pickups, renewals, and cancellations. You can find lists of cancelled shows here.
What do you think? Have you watched the original Law & Order TV series? Who would you like to see return for the revival?

I’m excited to see this show coming back!

I enjoy Law & Order and look forward to watching Season 21.

I’m looking forward to this. Please cancel Organized Crime. It’s embarrassing to see Stabler like this portrayal. Merge him into the renewal if possible.

With all the shows Dick Wolf produces now, I was not expecting this. Cool.

I’m looking forward to this show coming back!

Thank all that’s unholy that it’s NOT on CW. I’d hate to think what kind of a mess they would make out of the series. But seriously…. How many nights a week does Dick Wolf need to control an entire network prime time lineup? So far he’s got Tuesday on CBS, Wednesday on NBC, and already 2/3 of Thursday on NBC – with this reboot obviously completing that night. I’m thinking he needs to push for three ABC shows on either Monday or Friday. Either way it would knock some useless “reality” dragon **** out of the way, so it’s… Read more »