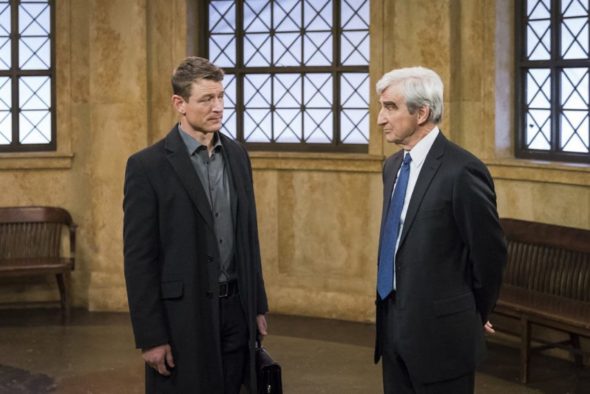 Just after NBC renewed Law & Order: SVU for a historic 21st season, Winchester announced he will be leaving the series after season 20:

Sadly for me, Peter stone and his “the facts don’t care about you’re feelings” attitude will not be returning. A huge tip of the hat to my amazing fans and not so big of fans. You ALL make me work harder. Thank you! See you on the next adventure.

I want to congratulate the cast and crew of @nbcsvu for making history today. Also to thank everyone for two great seasons. I have learned much and enjoyed being part of an elite unit. Here’s to you all and a historic run!

What do you think? Are you a fan of Law & Order: SVU? Are you sad Winchester is leaving?

I love SVU I LOVE THE WHOLE CAST WISH NONE OF THEM.WOULD LEAVE BUT THINGS CHANGE MAYBE THEY WILL.BRING BACK R LAST GUY

Omg yay ! 😀 Such good news. He is so much better than this show, thank god he get’s to show his better talents elsewhere

Philip Winchester was finally starting to feel like he actually ‘belonged’ with the SVU family; too bad that he won’t be returning. Wishing the best to a very fine actor who comes across as an incredibly good person as well.

Happy to see Stone leaving. I have nothing against the actor himself, and I wish him well…in some other series. He never really fit in with the rest of the cast, IMO. Whether that was how the character of Peter Stone was written or more the actor’s interpretation of it, the flow of scenes with him and the rhythm of any dialogue in which he spoke came across as stilted and uneven. He tended to barrel through his lines, making it seem as if his mind was always made up, leaving one to wonder if he was ever listening to… Read more »

I hope they bring back Alex Cabot for season 21!! She is my favorite ADA.

I wonder if he was let go because his seemingly lack of empathy was hitting to close to home. He came off to cold & as an obstructionist to the police trying to get “the victims” justice. Viewers want a happy ending, an escape from the real world. I hope he finds a worthy role to move on to. The show reinvents itself with every ending becoming a new beginning for someone else.

Hope the new character is as good as “Stone” was! I’ve liked the whole L&O series from the gitgo. Seems when one outstanding performer leaves, another has taken his/her place. Hope this trend continues!

I think they didn’t give him much to do this season. Liked that he was Stone’s son.

I really like the Peter Stone character& am very disappointed he won’t be back. I liked his approach,which helped to balance out some of Olivia’s bleeding heart tendencies.

SVU has gotten rather irritating for me. It’s become the Olivia Benson show. Winchester’s Stone character was one of the very few things that kept me watching. Looks like it’s time to just let this show go now.

I definitely agree, would have been 100x better if Olivia was the one leaving to give the show a chance to get back to how good it used to be

Olivia Benson is always a one dimensional character. Gloomy and just wrapped up in her work. Not much else to her.