Law & Order returns to NBC in February, and production has now begun on the revival. Jeffrey Donovan and Anthony Anderson are featured in the first photo from the set. The image was later deleted from Instagram, but it’s obvious the pair were working on set, per Collider. 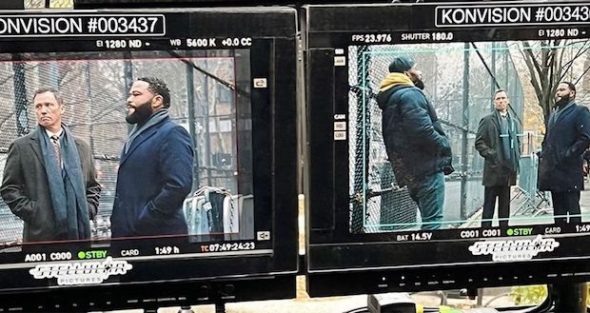 In addition to the news about the start of production, Deadline reports that Camryn Manheim is joining the drama as Lt. Kate Dixon – a replacement for Lt. Anita Van Buren (S. Epatha Merkerson). Merkerson currently stars on Chicago Med, another NBC and Dick Wolf drama. Manheim appeared in the original run of Law & Order in various guest roles. It was previously revealed that Hugh Dancy has also joined the cast, as an Assistant District Attorney.

What do you think? Will you be excited to see Law & Order back on NBC?

I absolutely loved the original L&O, the best in the series in my opinion, but remakes/continuations just don’t work for me. I’ll stick to re-runs, thanks.

They still need to add 2 people to the cast, and I doubt either will be a big name. Without Sam Waterston or Angie Harmon, this is a disaster. There had to be actors out there that were formerly on this show, SVU or Criminal Intent they could have brought in. I was not happy they brought back Anthony Anderson.

You can’t go wrong with anything that Dick Wolf produces.