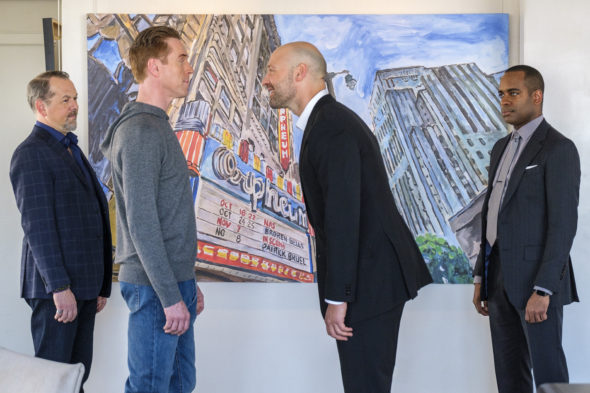 It’s been a long time between episodes of the Billions TV show, thanks to the pandemic. Showtime has announced that season five of the financial drama series will resume on Sunday, September 5th and there will be five episodes. The first seven installments of the season aired in April and May of 2020. The series was renewed for a sixth season late last year.

Here’s information about the return of Billions from Showtime:

LOS ANGELES – June 10, 2021 -SHOWTIME announced today that season five of the hit drama series BILLIONS, starring Oscar(R) nominee and Emmy(R) winner Paul Giamatti and Emmy winner Damian Lewis, will return on Sunday, September 5 at 9 p.m. ET/PT with five new episodes. For fans looking to catch up, the season five premiere episode of BILLIONS is now available for free on YouTube, Showtime.com and Sho.com, as well as across multiple SHOWTIME partner platforms. All episodes are available to stream for subscribers on SHOWTIME and across all SHOWTIME partner platforms. BILLIONS has been renewed for season six, which will premiere early next year.

In the second half of season five, the presence of powerful billionaire Mike Prince (Corey Stoll) sends ripples through Axe Capital and gives Chuck Rhoades (Giamatti) a potential new weapon in his fight against Bobby Axelrod (Lewis). Alliances form, get ripped apart and form anew, and everyone from Taylor (Asia Kate Dillon) to Wendy (Maggie Siff) gets roped into the conflict, which comes very close to destroying all they hold dear. The series also stars David Costabile, Condola Rashad, Kelly AuCoin and Jeffrey DeMunn. Jeanane Garafolo will guest star as Winslow, the hip owner of a legal cannabis corp.

Check out our status sheets to track new TV series pickups, renewals, and cancellations. You can find lists of cancelled shows here.
What do you think? Do you enjoy the Billions TV show on Showtime? Are you looking forward to the rest of season five and then, season six?

So glad got renewed another season enjoy it and love it.

Please boost your ratings look forward to seeing it every Sunday night drama. Look forward never missed any episode of it. Enjoy it and love it.

Glad t see Billions return but wish it was more than five episodes.

Ove Billions! Can’t wait for the Sept. episodes! DO NOT CANCEL BILLIONS!!!!

It’s renewed another season already as last fall announcement. I can’t wait to see in Semptember 5.

Look forward return premiere enjoy it and love it. Never missed any episodes of it. So good I can’t wait to see it.