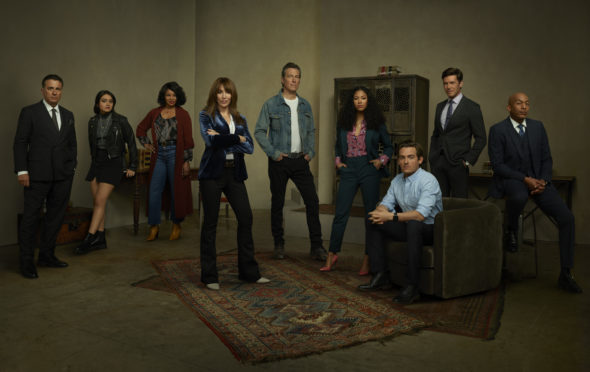 TV show description:
A drama series that was created by Krista Vernoff, the Rebel TV show is inspired by the life of activist Erin Brockovich today.

Annie “Rebel” Bello (Sagal) is a blue-collar legal advocate without a law degree. She’s a funny, messy, brilliant, and fearless woman who cares desperately about the causes she fights for and the people she loves. When Rebel applies herself to a fight she believes in, she will win at almost any cost.

She works for attorney Julian Cruz (Garcia) and constantly urges him to take on the cases she’s passionate about.

Rebel is currently married to Gracy (Corbett) and they are the adopted parents of Ziggie (Barer), their teenage daughter, a former addict who works as an intern at Julian’s firm.

A corporate lawyer, Benji Ray (Lesure) is Rebel’s former husband and the father of their daughter. Luke (Palladio) is a young attorney at Benji’s firm. Benji’s sister is Lana (Jones), Rebel’s investigator and a former cop.

Benji and Rebel’s adult daughter is Cassidy (Davis). She overcame her time as a juvenile delinquent and is now an attorney who can be counted on to help her mother. Nate (Zegers) is Rebel’s eldest son and a  gynecologist who’s afraid of commitment.

Series Finale:
Episode #10 — 36 Hours
Rebel, Cruz, Lana, and Ziggy round up an army of support to bring the Stonemore Medical case to a close.
First aired: June 10, 2021.

What do you think? Do you like the Rebel TV show? Do you think it should have been cancelled or renewed for a second season?

I thought Rebel was an excellent show and addition to the line up. Loved the kick ass – take no prisoner attitude of Rebel. Hopefully they will reconsider the cancellation and give the show a second chance. Most often things improve with a second season

This show needs to be picked up and continued by another network. It is too good to drop.