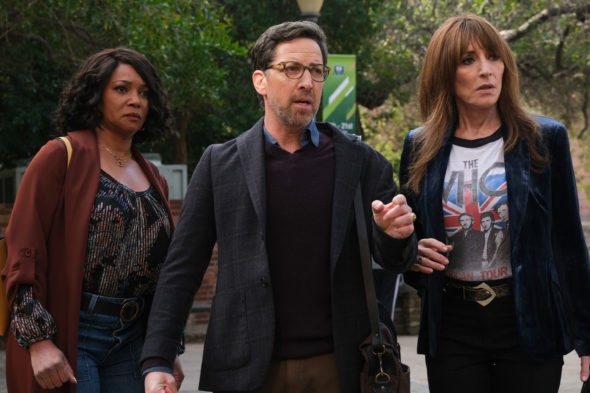 Can this advocate and her allies help those in need? Has the Rebel TV show been cancelled or renewed for a second season on ABC? The television vulture is watching all the latest cancellation and renewal news, so this page is the place to track the status of Rebel, season two. Bookmark it, or subscribe for the latest updates. Remember, the television vulture is watching your shows. Are you?

Airing on the ABC television network, the Rebel TV show is inspired by the current life of activist Erin Brockovich and stars Katey Sagal, John Corbett, James Lesure, Lex Scott Davis, Tamala Jones, Ariela Barer, Kevin Zegers, Sam Palladio, and Andy Garcia. Annie “Rebel” Bello (Sagal) is a blue-collar legal advocate without a law degree. She’s a funny, messy, brilliant, and fearless woman who cares desperately about the causes she fights for and the people she loves. When Rebel applies herself to a fight she believes in, she will win at almost any cost.

The first season of Rebel averaged a 0.40 rating in the 18-49 demographic and 3.05 million viewers. Find out how Rebel stacks up against other ABC TV shows.

Will ABC cancel or renew Rebel for season two? ABC could use some new drama series and they gave it a plum timeslot, behind top-rated drama Grey’s Anatomy. However, the show doesn’t hold onto many of those viewers. My suspicion is that ABC will renew it but the numbers will have to improve in season two for it to keep going. I’ll update this page with breaking developments. Subscribe for free alerts on Rebel cancellation or renewal news.

5/14/21 update: Rebel has been cancelled by ABC so there won’t be a second season.

What do you think? Were you hoping that the Rebel TV show would be renewed for a second season? Are you sorry that ABC cancelled this TV series, instead?

It was a great show. Such a great cast. Please bring it back.

Every time they have a show that is interesting, not a lot of sex they cancel it. What happened to our morals?