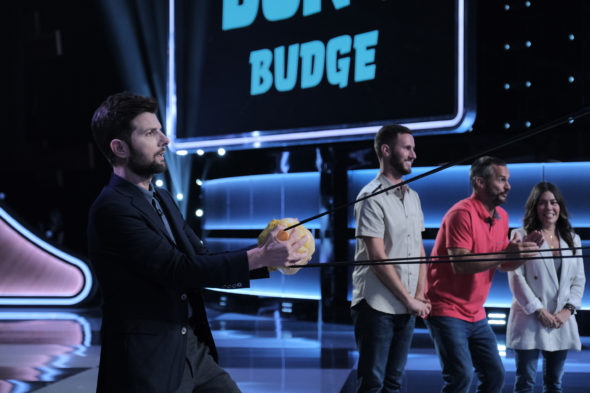 “Do” you want this series to be picked up?  Has the Don’t TV show been cancelled or renewed for a second season on ABC? The television vulture is watching all the latest cancellation and renewal news, so this page is the place to track the status of Don’t, season two. Bookmark it, or subscribe for the latest updates. Remember, the television vulture is watching your shows. Are you?

Airing on the ABC television network, the Don’t TV series is hosted by Adam Scott and executive produced by Ryan Reynolds (who also provides voice-over). The series offers contestants the opportunity to team up with their family and friends for the chance to win a cash prize of up to $100,000. Together, they tackle crazy tasks, each with the simple rule: “DON’T.” In each episode, members of a four-person team strive to accomplish various “Don’t” challenges — like “Don’t Blink,” “Don’t Look Back,” “Don’t Scream,” and “Don’t Play Ball in the House” — as they work together to build their bank. If they fail a challenge, the team doesn’t earn money and instead suffers ridiculous consequences.

The first season of Don’t averaged a 0.59 rating in the 18-49 demographic and 3.00 million viewers. Find out how Don’t stacks up against other ABC TV shows.

Will ABC cancel or renew Don’t for season two? The ratings aren’t great but, I think they are good enough to get the series renewed. I’ll update this page with breaking developments. Subscribe for free alerts on Don’t cancellation or renewal news.

4/9/21 update: Don’t has been cancelled so there won’t be a second season.

What do you think? Were you hoping that the Don’t TV show would be renewed for a second season? Are you sorry that ABC cancelled this TV series, instead?