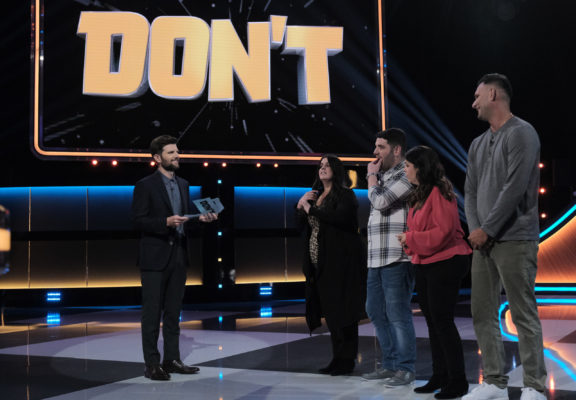 ABC has had some great success in the ratings with its summer game shows. Most of the series have been updated versions of game shows from the past but the Don’t TV series is a somewhat original concept. Is this a show that people will want to watch week after week? Will Don’t be cancelled or renewed for season two? Stay tuned. *Status update below.

A comedic physical game show, the Don’t TV series is hosted by Adam Scott and executive produced by Ryan Reynolds (who provides his voice to the series). The series offers contestants the opportunity to team up with their family and friends for the chance to win a cash prize of up to $100,000. Together, they tackle crazy tasks, each with the simple rule: “DON’T.” In each episode, members of a four-person team strive to accomplish various “Don’t” challenges — like “Don’t Blink,” “Don’t Look Back,” “Don’t Scream,” and “Don’t Play Ball in the House” — as they work together to build their bank. If they fail a challenge, the team doesn’t earn money and instead suffers ridiculous consequences.

What do you think? Do you like the Don’t TV series on ABC? Should it be cancelled or renewed for a second season?